Bradbury Stories: 100 of His Most Celebrated Tales (Paperback) 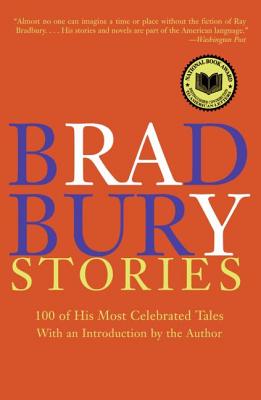 This retrospective collection of 100 of Bradbury’s greatest stories spans six decades of his astonishing career and secures his place as a master of the American short story.

For more than sixty years, the imagination of Ray Bradbury has opened doors into remarkable places, ushering us across unexplored territories of the heart and mind while leading us inexorably toward a profound understanding of ourselves and the universe we inhabit. In this landmark volume, America's preeminent storyteller offers us one hundred treasures from a lifetime of words and ideas. The stories within these pages were chosen by Bradbury himself, and

In a career spanning more than seventy years, Ray Bradbury, who died on June 5, 2011 at the age of 91, inspired generations of readers to dream, think, and create. A prolific author of hundreds of short stories and close to fifty books, as well as numerous poems, essays, operas, plays, teleplays, and screenplays, Bradbury was one of the most celebrated writers of our time. His groundbreaking works include Fahrenheit 451, The Martian Chronicles, The Illustrated Man, Dandelion Wine, and Something Wicked This Way Comes. He wrote the screen play for John Huston's classic film adaptation of Moby Dick, and was nominated for an Academy Award. He adapted sixty-five of his stories for television's The Ray Bradbury Theater, and won an Emmy for his teleplay of The Halloween Tree. He was the recipient of the 2000 National Book Foundation Medal for Distinguished Contribution to American Letters, the 2004 National Medal of Arts, and the 2007 Pulitzer Prize Special Citation, among many honors.

Throughout his life, Bradbury liked to recount the story of meeting a carnival magician, Mr. Electrico, in 1932. At the end of his performance Electrico reached out to the twelve-year-old Bradbury, touched the boy with his sword, and commanded, "Live forever!" Bradbury later said, "I decided that was the greatest idea I had ever heard. I started writing every day. I never stopped."