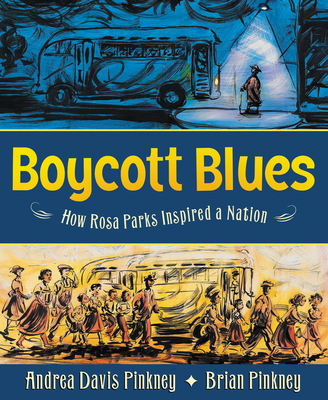 Bestselling and multiple Coretta Scott King– and Caldecott–winners Andrea Davis Pinkney and Brian Pinkney present a poignant, blues-infused tribute to the men and women of the Montgomery bus boycott, who refused to give up until they received justice. An essential read-aloud for librarians, teachers, and parents.

On December 1, 1955, Rosa Parks refused to give up her seat on the bus, and the Montgomery bus boycott began. So did the boycott blues. In the days that followed—382 days to be exact—many people decided they’d rather walk than take city transportation.

Some started taxis, some rode bikes, but they all walked and walked. With dogged feet. With dog-tired feet. With boycott feet. With the boycott blues. The Montgomery bus boycott finally ended when the Supreme Court ruled that segregation on public transportation was unconstitutional.

Includes a note from the author and a list of resources.

Andrea Davis Pinkney is the author of many acclaimed picture books and young adult novels. She received a Coretta Scott King Author Honor Award for Let It Shine. Her collaborations with her husband, Brian Pinkney, include Peggony-Po; Sleeping Cutie; Ella Fitzgerald: The Tale of a Vocal Virtuosa; Dear Benjamin Banneker; and the Caldecott Honor and Coretta Scott King Illustrator Honor book Duke Ellington: The Piano Prince and His Orchestra. She is a children's book editor at a major publishing company. She lives with her family in Brooklyn, New York.

Brian Pinkney has illustrated numerous books for children, including two Caldecott Honor books, The Faithful Friend, by Robert D. San Souci, and Duke Ellington: The Piano Prince and His Orchestra, by Andrea Davis Pinkney. Mr. Pinkney's own books include Hush, Little Baby; Cosmo and the Robot; Max Found Two Sticks; JoJo's Flying Side Kick; and The Adventures of Sparrowboy, winner of the 1997 Boston Globe-Horn Book Award. Brian Pinkney has received the Coretta Scott King Award for illustration and three Coretta Scott King Honor Awards. He lives with his wife, Andrea, and their children in Brooklyn, New York.