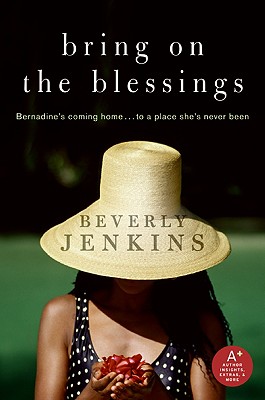 This is book number 1 in the Blessings Series series.

Bestselling author Beverly Jenkins makes the move to trade paperback with this rich and moving story that introduces us to the beautiful Kansas town of Henry Adams, and the townspeople who make it unique

Bernadine Brown is a woman with money to spend. Henry Adams is a town in desperate need of cash. But after Bernadine puts up the money, she has some ideas about how the town should be run. Will the townspeople be willing to shake up their comfortable lives to share the gift they’ve been given with others who really need it?

One of the few all Black towns founded after Reconstruction, over a century later Henry Adams was falling apart. So Mayor Trenton July took a chance and put his town up for sale on the internet. With a new owner in town, and the ex mayor and his friends up in arms and doing everything they can to turn the deal on its head, will this be the death of Henry Adams...or its rebirth?

Beverly Jenkins is the recipient of the 2018 Michigan Author Award by the Michigan Library Association, the 2017 Romance Writers of America Lifetime Achievement Award, as well as the 2016 Romantic Times Reviewers’ Choice Award for historical romance. She has been nominated for the NAACP Image Award in Literature, was featured in both the documentary Love Between the Covers and on CBS Sunday Morning. Since the publication of Night Song in 1994, she has been leading the charge for inclusive romance, and has been a constant darling of reviewers, fans, and her peers alike, garnering accolades for her work from the likes of The Wall Street Journal, People Magazine, and NPR.

To read more about Beverly, visit her at www.BeverlyJenkins.net.