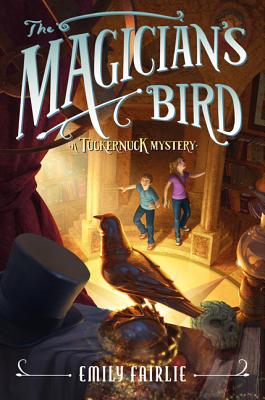 This is book number 2 in the Tuckernuck Mysteries series.

In this sequel to The Lost Treasure of Tuckernuck, Bud and Laurie solve another mystery at Tuckernuck Hall. This second hilarious installment is perfect for fans of From the Mixed-up Files of Mrs. Basil E. Frankweiler, Chasing Vermeer, The Westing Game, and the Mysterious Benedict Society books.

In The Magician's Bird, the mystery Bud and Laurie must solve is much more serious than a treasure hunt—their beloved school founder, Maria Tutweiler, has been accused of murdering Marchetti the Magician! Can Bud and Laurie—with the help of enthusiastic Misti and evil but useful Calliope—prove Maria Tutweiler's innocence? Or will Tuckernuck Hall be closed down for good?

Emily Fairlie once again blends lists, notes, and classic prose to tell a story that sings with humor, suspense, and magic.

Emily Fairlie grew up in Virginia and went to Tuckahoe Middle School, which has so far managed to escape the scandals that have plagued Tuckernuck Hall. She has been known to call on her little sister for backup and has witnessed firsthand the horror of bedazzling gone wrong. She now lives in Chicago with her dog, Binky.

“Perfect for mystery fans looking for a healthy dose of adventure and fun.”
— School Library Journal

“The characters’...sassy repartee is spot-on and comical, providing the real magic in the story. Fans of the first book will be glad to rejoin this unlikely team of detectives.”
— Kirkus Reviews

Praise for The Lost Treasure of Tuckernuck: “A sure hit.”
— Kirkus Reviews