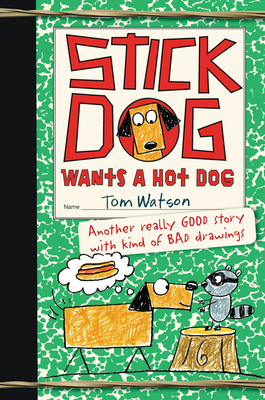 This is book number 2 in the Stick Dog series.

Perfect for fans of the Dog Man, Big Nate, Timmy Failure, and Diary of a Wimpy Kid books, Stick Dog and his friends are back, and they're hungrier than ever!

As the dogs embark on their quest for hot dogs, they learn they're not the only ones on a mission—a band of raccoons is following close behind, and they're ravenous, too!

In this second book in the series, Stick Dog and his four friends, Poo-Poo, Mutt, Stripes, and Karen, must execute a master plan for stealing hot dogs. The closer they get to the hot dog vendor, the more difficult their mission becomes.

The five dogs are met with many funny challenges along the way, including having to distract the frankfurter guy and Karen getting locked in a human's house. No matter what, these dogs have their eyes—and stomachs—on the prize.

With hilarious text and stick-figure drawings, reluctant readers will eat this one up!

Other favorites in the series include Stick Dog Dreams of Ice Cream, Stick Dog Chases a Pizza, and many more!