Life Is Not an Accident: A Memoir of Reinvention (Hardcover) 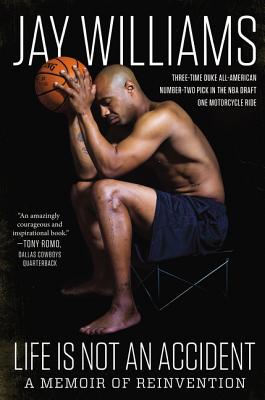 By Jay Williams
Email or call for price
Hard to Find

This big-hearted memoir by the most promising professional basketball player of his generation details his rise to NBA stardom, the terrible accident that ended his career and plunged him into a life-altering depression, and how he ultimately found his way out of the darkness.

Ten years ago, Jay Williams was at the beginning of a brilliant professional basketball career. The Chicago Bulls’ top draft pick—and the second pick of the entire draft—he had the great Michael Jordan’s locker. Then he ran his high-performance motorcycle head-on into a light pole, severely damaging himself and ending his career.

In this intense, hard-hitting, and deeply profound memoir, Williams talks about the accident that transformed him. Sometimes, the memories are so fresh, he feels like he’ll never escape the past. Most days, he finds a quiet peace as a commentator on ESPN and as an entrepreneur who can only look back in astonishment at his younger self—a kid who had it all, thought he was invincible, and lost everything . . . only to gain new wisdom.

Williams also shares behind the scenes details of life as an All-American. He tells it straight about the scandalous recruiting process and his decision to return to Duke and Coach K—a man who taught him about accountability—to finish his education. He also speaks out about corruption—among coaches, administrators, players, and alumni—and about his time in the NBA, introducing us to a dark underworld culture in the pros: the gambling, drugs, and sex in every city, with players on every team.

Jay Williams is a former professional basketball player and current ESPN analyst. While at Duke, Jay won the Naismith College Player of the Year Award, was named the AP Player of the Year in 2002, and was a unanimous first-team All-American. Jay was drafted by the Chicago Bulls as the second overall pick in the 2002 NBA draft. He is a motivational speaker, president of the Jay Williams Group, managing partner of the Leverage Agency, and a committed member of a number of charities.

“A lot of athletes have been to the mountaintop and back to the bottom in the course of their careers, and their stories end there. But not Jay’s. He was determined to build a life beyond basketball no matter how many hard picks he’d have to fight through.”
— Charles Barkley, TNT baseball analyst and NBA legend

“From a freakish motorcycle accident that derailed his destiny to overcoming the residue from it that left a severe mental and emotional stain, Jay’s story is about strength, resilience, and redemption. Life Is Not an Accident is a surprisingly honest and revealing account that will inspire and resonate with all.”
— Grant Hill, CBS basketball analyst and former NBA All-Pro

“Jay Williams has led a fascinating life, much of it in the public eye. But it is the very private side of the man— through his breathtaking highs and startling lows—that makes this gutsy, intimate, unflinchingly honest memoir impossible to put down.”
— Mike Greenberg, ESPN's Mike & Mike