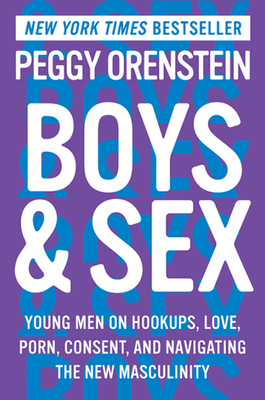 Now in paperback—Peggy Orenstein, author of the groundbreaking New York Times bestseller Girls & Sex, turns her focus to the sexual lives of young men. “Eye-opening…. Every few pages, the boy world cracks open a little bit…. Even in the most anxiety-provoking moments of Boys & Sex, it’s clear that Orenstein believes in the goodness of boys and the men they can become, and she believes in us, as parents, to raise them” (New York Times Book Review).

Peggy Orenstein’s Girls & Sex broke ground, shattered taboos, and launched conversations about young women’s right to pleasure and agency in sexual encounters. It also had an unexpected effect on its author: Orenstein realized that talking about girls is only half the conversation. Boys are subject to the same cultural forces as girls—steeped in the same distorted media images and binary stereotypes of female sexiness and toxic masculinity—which equally affect how they navigate sexual and emotional relationships. In Boys & Sex, Peggy Orenstein dives back into the lives of young people to once again give voice to the unspoken, revealing how young men understand and negotiate the new rules of physical and emotional intimacy.

Drawing on comprehensive interviews with young men, psychologists, academics, and experts in the field, Boys & Sex dissects so-called locker room talk; how the word “hilarious” robs boys of empathy; pornography as the new sex education; boys’ understanding of hookup culture and consent; and their experience as both victims and perpetrators of sexual violence. By surfacing young men’s experience in all its complexity, Orenstein is able to unravel the hidden truths, hard lessons, and important realities of young male sexuality in today’s world. The result is a provocative and paradigm-shifting work that offers a much-needed vision of how boys can truly move forward as better men.

PEGGY ORENSTEIN is the New York Times bestselling author of Boys & Sex, Don’t Call Me Princess, Girls & Sex, Cinderella Ate My Daughter, Waiting for Daisy, Flux, and Schoolgirls. A frequent contributor to the New York Times, she has written for The Washington Post, The Atlantic, AFAR, the New Yorker, and other publications, and has contributed commentary to NPR’s All Things Considered and The PBS NewsHour. She lives in Northern California.

“A brisk, bracing read, Boys & Sex is essential for any parent who wants their son to avoid the traps of what’s become known as “toxic masculinity,” to discover his true sexual orientation and desires without trauma, and to have not just safe, legal sex but really great sex. The whip-smart Orenstein … makes a convincing case for why parents who were aware of her work with girls and used to say they were relieved to have sons now “realized that their job may actually be harder: they had to raise good men,” as she writes.”  — Men’s Health

“Eye-opening…. Every few pages, the boy world cracks open a little bit…. Even in the most anxiety-provoking moments of Boys & Sex, it’s clear that Orenstein believes in the goodness of boys and the men they can become, and she believes in us, as parents, to raise them. As for how? There’s a great, galvanizing chapter at the end.” — New York Times Book Review

“[Orenstein] trains her expert eye on the world of adolescent boys, and the unique set of challenges that young men are facing today. Boys & Sex is not just a candid and often devastating view into the lives of real high school and college boys right now; it's an affirmation of hope, and an exercise in the power of listening.”  — Salon

“A sobering look at the landscape in which young men are growing up — and an invitation for the grown-ups in their lives to offer a lot more support and direction.”  — Chicago Tribune

“Peggy Orenstein has done something rare. She has listened to young men in ways that have allowed them to speak candidly about the fraught world of their sexuality, and she has been true to the complexities of their experiences -- their hopes but also the fears, shame, pressures and angers that cause them to violate others and corrode their capacity for care and love. What they say is scary and heartbreaking and vitally important for us all to hear. This is a bracing, insightful, humane, engaging, invaluable book.  And it charts the course for real change.”   — Richard Weissbourd, Senior Lecturer and Faculty Director of Making Caring Common, Harvard Graduate School of Education

“Masculinity doesn’t have to be toxic—but so much of what we communicate to boys about masculinity is just that. The amazing Peggy Orenstein does more than just document the atrocities. She listens to boys and bears witness to their efforts to free themselves from trap the culture sets for them. Boys & Sex  is required reading for anyone who has ever loved, raised, been, or will become a boy.” — Dan Savage, bestselling author and host of Savage Podcast

“As a psychotherapist who's raising a boy, I can't think of a more important book for our times. Eye-opening and nuanced, this compassionate exploration of boys' sexual lives gives voice to their deepest struggles and should be mandatory reading for anyone who cares about the next generation--which is to say, all of us.” — Lori Gottlieb,  New York Times  bestselling author of  Maybe You Should Talk to Someone

“Peggy Orenstein dared to do what so many of us are afraid of: actually ask boys about sex and then listen to what they had to say. She has given boys the opportunity to speak honestly about their feelings around sexuality, pornography, gender, consent and so much more. Their answers are illuminating, often times surprising—and essential.” — Nick Kroll, co-creator, writer, and star of Big Mouth

Forget what you thought you knew about boys and sex. Here, at last, is an honest book about the sexual lives of boys and young men; the good, the bad, the endlessly complicated and emotionally fraught. Peggy Orenstein has peeled back typical male bravado and exposed the raw hearts of boys struggling to navigate a confusing sexual landscape.  Boys & Sex  is a crucial contribution to the long overdue conversation about masculinity.” — Michael Ian Black, author, comedian, and actor