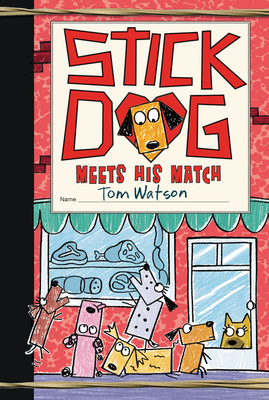 This is book number 10 in the Stick Dog series.

Well, not before Stick Dog’s day spins out of control first. As he and his friends work to rescue a hyper Karen from a really deep hole, Poo-Poo catches a scent. It’s meat! Marvelous meat! And it’s in a big truck. But there’s more than meat in that truck. There’s also a new dog. And when Stick Dog sees her, his heart feels funny.

Stick Dog needs to rescue Karen and track down that meat truck. It will take all Stick Dog’s smarts, problem-solving skills, and patience to save his friend—and feed his gang. But he just might need some help this time…

It’s another tail-wagging, food-craving adventure for these hilarious hungry hounds. Throw in some puppy love (!) and this Stick Dog adventure is unlike any ever before.