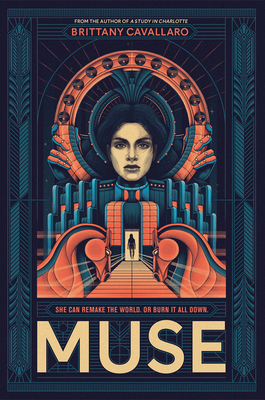 American Royals meets The Winner’s Curse in the first book of a dazzling duology from New York Times bestselling author Brittany Cavallaro about revolution, love, and friendship in a reimagined American monarchy.

The year is 1893, and war is brewing in the First American Kingdom. But Claire Emerson has a bigger problem. Claire’s father is a sought-after inventor, but he believes his genius is a gift granted to him by his daughter’s touch, so he keeps Claire under his control.

As their province prepares for war, Claire plans to escape, even as her best friend, Beatrix, tries to convince her to stay and help with the growing resistance movement that wants to see a woman on the throne.

When her father’s weapon fails to fire on the World’s Fair’s opening day, Claire is taken captive by Governor Remy Duchamp, St. Cloud’s young, untried ruler. Remy believes that Claire’s touch bestows graces he’s never had, and with political rivals planning his demise, Claire might be his only ally.

The last thing that Claire has ever wanted is to be someone else’s muse, but she finally has a choice: Will she quietly remake her world from the shadows—or bring it down in flames?

Brittany Cavallaro is the author of the New York Times bestselling Charlotte Holmes series and the poetry collection Girl-King. She earned her BA in literature from Middlebury College and her MFA in poetry from the University of Wisconsin–Madison. She lives in Michigan. Find her at her website, www.brittanycavallaro.com, or on Twitter @skippingstones.

"In this fresh duology starter from Cavallaro (the Charlotte Holmes series), the novel’s heroine shares center stage with a glittering alternate version of the U.S.. Peopled with real-world historical characters alongside the fictional ones, Cavallaro’s vision of U.S. history presents thought-provoking parallels to past and present realities." — Publishers Weekly

“With glittering gaslight and science laced with magic, Muse will keep you up all hours with its twisty plot and feisty heroine. Friendship, romance, and mystery abound!” — Susan Dennard, New York Times bestselling author

“Brittany Cavallaro gives us another heroine to root for in this sparkling exploration of America as a monarchy, set against the rich backdrop of a world fair. Muse is an immersive tale of a girl navigating political machinations to discover the truth about the kingdom, and herself.” — Stacey Lee, award-winning author of The Downstairs Girl

“Uncooperative, riotous women reclaim history in Brittany Cavallaro’s complex reimagining of the 1893 World’s Fair, set in an alternate American monarchy on the brink of war. An electric reclamation of America’s past, and a warning for the future if we continue to underestimate the strength of young women and their power to control their own narratives, and the world.”  — Mackenzi Lee, New York Times bestselling author of The Gentleman’s Guide to Vice and Virtue

Praise for the Charlotte Holmes series: “A thrilling twist on a classic. Readers will be pulled in by both the riveting mystery and Charlotte Holmes, a brilliant heroine with secrets of her own.” — Maureen Johnson, New York Times bestselling author of the Shades of London series

“Beautiful prose, thrilling action, a touch of romance, and two complicated heroes to root for make this a not-to-be-missed sequel. Readers will be craving the final book in the trilogy.” — Booklist (starred review) on The Last of August

“Fans of the first Charlotte Holmes novel, A Study in Charlotte, will not be disappointed, and readers who are new to these characters will savor the fast-paced plot... This series is entirely un-put-downable. The Last of August will definitely leave readers anxiously awaiting the next installment.” — Voice of Youth Advocates (VOYA) on The Last of August

“Cavallaro’s crackling dialogue, well-drawn characters, and complicated relationships make this feel like a seamless and sharp renewal of Doyle’s series. An explosive mystery featuring a dynamic duo.” — Kirkus Reviews (starred review) on A Study in Charlotte

“Fans of television’s Elementary and Sherlock will avidly devour this book...a joyous excuse to watch one of the literary world’s most beloved pairings come together.” — Booklist on A Study in Charlotte

Praise for Hello Girls: “The girls’ voices are authentic, and readers will enjoy a feeling of female empowerment as they follow them on their road trip... Drawing inspiration from Thelma & Louise, this book provides a fun, fast-paced plot with resourceful feminist protagonists.”

“If Gillian Flynn decided to write a YA novel, it might go something like this...Cavallaro and Henry write with sharp, crisp voices, imbuing their heroines with wit and outsized imagination. They capture the idiosyncrasies of young female friendship with startling acuity, nailing the deep care and love of these relationships... A novel that taps into something elemental about the ferocity of female adolescence and luxuriates in that space to create a page-turning tale with a potent electric current at its heart.” — Entertainment Weekly

“Hello Girls is exactly the kind of smart, angry, tender-hearted, patriarchy-dismantling story that I’ve been hungering for, with a gorgeous, complex friendship at its core. Beautifully written, with a thrumming vitality in every sentence and characters so real that their passions, hurts, and triumphs will leave you breathless.” — Claire Legrand, New York Times bestselling author of Furyborn and Sawkill Girls

“Hello Girls made me want to hit the road with my best friend. It’s fierce and funny and full of heart, and made me feel invincible.” — Jennifer Niven, New York Times bestselling author of All the Bright Places and Holding Up the Universe

“A stirring tale of female friendship, loyalty, and the depth of love.” — Mindy McGinnis, Edgar Award-winning author of The Female of the Species

“Holy cats, I loved this book. Electric and powerful and so, so smart, Hello Girls is the YA Thelma & Louise I didn’t know was missing from my life. Winona and Lucille--and Cavallaro + Henry--make a fierce, fantastic team.” — New York Times bestselling author Katie Cotugno

“A wild ride that finds its footing in the deep bonds of friendship.” — ALA Booklist

“It’s easy to draw parallels between Hello Girls and other dark girl-power comedies like Thelma and Louise, but Cavallaro and Henry offer something extra in Lucille and Winona’s relationship... The high stakes come across as genuine and realistic, and the girls tackle their traumas with grit and humor. Readers will find comfort in the resilience of the characters and the strength of their friendship.” — Bulletin of the Center for Children’s Books