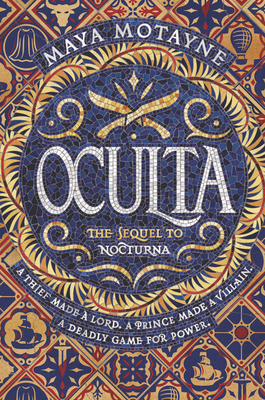 This is book number 2 in the Nocturna series.

The exhilarating sequel to the #1 Sunday Times and Los Angeles Times bestseller Nocturna, about a face-changing thief and a risk-taking prince who must reunite when a deadly enemy threatens their kingdom’s chance at establishing a global peace. An epic fantasy perfect for fans of Tomi Adeyemi, Sabaa Tahir, and Stephanie Garber.

After joining forces to save Castallan from an ancient magical evil, Alfie and Finn haven’t seen each other in months. Alfie is finally stepping up to his role as heir and preparing for an International Peace Summit, while Finn is traveling and reveling in her newfound freedom from Ignacio.

That is, until she’s unexpectedly installed as the new leader of one of Castallan’s powerful crime syndicates.

Just when Finn finds herself back in San Cristobal, Alfie’s plans are also derailed. The mysterious organization responsible for his brother’s murder has resurfaced—and their newest target is the summit. And when these events converge, Finn and Alfie are once again forced to work together to follow the assassins’ trail and preserve Castallan’s hopes for peace with Englass.

But will they be able to stop these sinister foes before a new war threatens their kingdom?

Maya Motayne decided to be a writer when she was four years old and hasn’t stopped writing since. Her first novel, Nocturna, was a Los Angeles Times bestseller as well as a #1 Sunday Times bestseller. Maya lives in New York City, where she pursues her passions of petting as many dogs as possible and buying purses based on whether they can fit a big book in them. To learn more about Maya, visit her website at mayamotayne.com.

Praise for NOCTURNA: “What makes Motayne’s debut title singular and special is that her kingdom is Latinx, with brown-skinned, curly-haired people and Spanish sprinkled throughout…. Cinematic, plentiful action as well as intriguing protagonists will pull many a fantasy reader, and the richly detailed world will keep them reading.” — ALA Booklist

Praise for NOCTURNA: “This fantasy set in a Latinx kingdom explores the lasting effects of childhood trauma, the destructive potential of grief, and the redemptive power of love…. the stakes are high, Finn and Alfie’s reluctant attraction rings true, and a gratifying conclusion paves the way for book two.” — Publishers Weekly

Praise for NOCTURNA: “This searing, magical Latinx-inspired fantasy pulled me in from the first page and did not let me go. I loved adventuring with brave Alfie and brash Finn, and I held my breath until the end. Nocturna is a magnificent debut, powerful and true.”
— Julie C. Dao, author of Forest of a Thousand Lanterns

Praise for NOCTURNA: “Nocturna is an exhilarating adventure, bursting with lively, inventive magic and characters who charmed me the instant they appeared on the page. If you want to get swept up in a story, pick this one.” — New York Times bestselling author Margaret Rogerson

Praise for NOCTURNA: “Fantasy fans will embrace the creative worldbuilding and welcome these flawed and multi-layered characters into their hearts.” — Cinda Williams Chima,author of the best-selling Seven Realms series