The Ballad of Tubs Marshfield (Paperback) 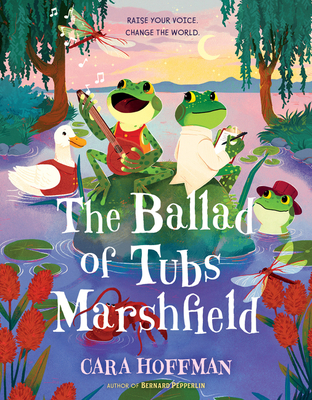 “This is a cute children’s book about the environment, the power of music, and the changes we can make if we all come together for a common good. It is a great way to introduce children to activism.”
— Gabrielle Belisle, An Unlikely Story, Plainville, MA

Fans of Sara Pennypacker and Katherine Applegate will love this thrilling environmental fable—filled with laughter, music, and adventure.

There’s no other place Tubs Marshfield would rather be than singing a song in his perfect little swamp along the Louisiana bayou. His music can make anyone feel happy.

But something terrible is happening within the swamp that even Tubs’ songs can’t fix—and it’s making his neighbors feel sick! No one knows what to do, least of all Tubs.

A mysterious prophecy may hold the key…or send Tubs away from his friends forever.

Cara Hoffman is the author of three critically acclaimed novels for adults: Running (a New York Times Editor's Choice), Be Safe I Love You (nominated for a Folio Prize), and So Much Pretty (a New Yorker Books Pick and New York Times Best Suspense Novel of 2011). She is also the author of the popular middle grade novel Bernard Pepperlin (a Junior Library Guild Selection). She has written for Rolling Stone, the New York Times, Paris Review, Bookforum, and National Public Radio, among others, and has been a visiting writer at University of Oxford. She lives in Manhattan and teaches at the Stonecoast MFA program at University of Southern Maine.

“Hoffman brings the rich beauty of the ancient swamp to life … [and] shines a sharp light on humans’ damaging impact on nature, the story also shows the inspiring power of setting aside differences and working together to make change.” — Publishers Weekly

"Hoffman has created in Tubs the voice of personal and collective responsibility for the protection of animal habitats that is sure to appeal to young activists; Tubs’s protest songs become a call to action. ...Hoffman paints a powerful sense of place, and the language sparkles with the color, sounds, and smells of the teeming life of the swamp."
— School Library Journal

PRAISE FOR BERNARD PEPPERLIN:
“Hoffman deftly creates a compellingly different kind of Wonderland, a place with its own set of realities and whose residents understand that, in spite of their differences, they are stronger together than apart. Everything a fantasy should be and more.” — Kirkus Reviews (starred review)

&#8220A quirky flight of fancy with a rich lineage.” — Publishers Weekly