Lincoln's Mentors: The Education of a Leader (Hardcover) 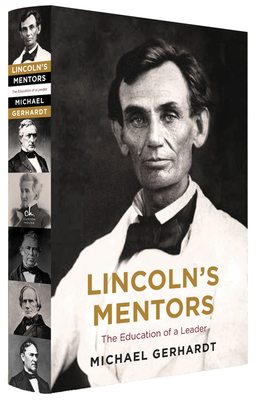 “Abraham Lincoln had less schooling than all but a couple of other presidents, and more wisdom than every one of them. In this original, insightful book, Michael Gerhardt explains how this came to be." –H.W. Brands, Wall Street Journal

In 1849, when Abraham Lincoln returned to Springfield, Illinois, after two seemingly uninspiring years in the U.S. House of Representatives, his political career appeared all but finished. His sense of failure was so great that friends worried about his sanity. Yet within a decade, Lincoln would reenter politics, become a leader of the Republican Party, win the 1860 presidential election, and keep America together during its most perilous period. What accounted for the turnaround?

As Michael J. Gerhardt reveals, Lincoln’s reemergence followed the same path he had taken before, in which he read voraciously and learned from the successes, failures, oratory, and political maneuvering of a surprisingly diverse handful of men, some of whom he had never met but others of whom he knew intimately—Henry Clay, Andrew Jackson, Zachary Taylor, John Todd Stuart, and Orville Browning. From their experiences and his own, Lincoln learned valuable lessons on leadership, mastering party politics, campaigning, conventions, understanding and using executive power, managing a cabinet, speechwriting and oratory, and—what would become his most enduring legacy—developing policies and rhetoric to match a constitutional vision that spoke to the monumental challenges of his time.

Without these mentors, Abraham Lincoln would likely have remained a small-town lawyer—and without Lincoln, the United States as we know it may not have survived. This book tells the unique story of how Lincoln emerged from obscurity and learned how to lead.

MICHAEL J. GERHARDT is Burton Craige Distinguished Professor of Jurisprudence at the University of North Carolina at Chapel Hill. In 2019, he was one of four constitutional scholars called by the House Judiciary Committee during President Trump’s impeachment proceedings. He has testified more than twenty times before Congress, has been special counsel to the Senate Judiciary Committee for five Supreme Court nominations, and has served twice as CNN’s impeachment expert. His op-eds have appeared in the New York Times, The Atlantic, and the Washington Post. He lives with his wife, Deborah, and their three sons in Chapel Hill, North Carolina.

“Abraham Lincoln had less schooling than all but a couple of other presidents, and more wisdom than every one of them. In this original, insightful book, Michael Gerhardt explains how this came to be. ... Gerhardt’s emphasis on Lincoln’s education casts his presidency in a distinctive light. This is no small accomplishment." — H.W. Brands, Wall Street Journal

“Abraham Lincoln had less schooling than all but a couple of other presidents, and more wisdom than every one of them. In this original, insightful book, Michael Gerhardt explains how this came to be. He focuses on five men he calls Lincoln’s mentors, but the book is really an account of how Lincoln educated himself. Crucially, it does not stop at the inauguration; more than any other president, Lincoln grew in office. Until the very end of his life, his self-education never ceased. ... Gerhardt’s emphasis on Lincoln’s education casts his presidency in a distinctive light. This is no small accomplishment given all that has been written about Lincoln. Mr. Gerhardt stresses that Lincoln was 'educable,' a quality never more necessary in an occupant of the White House than during the Civil War.” — H.W. Brands, Wall Street Journal

“Lincoln’s Mentors has a vital lesson for anyone who's trying to succeed, or trying to help others succeed. The book's big idea is that Lincoln, for all his gifts, was intentional about seeking out mentors who could help him master oratory, speechwriting, party politics, campaigning, conventions, executive power, managing a cabinet.” — Mike Allen, Axios

“Michael J. Gerhardt has devised an ingenious solution for demystifying America’s most enigmatic president: examining the key people who influenced Lincoln as he developed his own unique skills and leadership style. These pages trace how a poor backwoods farm boy rose to become among the most eloquent defenders of America’s highest ideals, as well as a steely and tenacious source of unity when the nation needed it most. Gerhardt shows that Lincoln’s genius was in borrowing selectively from the examples of his mentors—both the famous and the obscure—to become an unsurpassed original.” — Russell L. Riley, Co-chair of the Presidential Oral History Program at the University of Virginia’s Miller Center

“Understanding the ideas that shaped Lincoln’s mind helps us understand the ideas that shaped the American mind. In this illuminating book, Michael Gerhardt brings Lincoln’s intellectual and political mentors to life, offering vivid and unexpected insights about Lincoln and the teachers who inspired him.” — Jeffrey Rosen, President & CEO, National Constitution Center

"A worthy addition to the Lincoln bibliotheca. ... Professor Gerhardt is a splendid writer of non-fiction. His storyline is clear and resonant. The author is fluent in Lincoln history and political philosophy, but he stays close to his aspiration for the book —not to cover every event, but to demonstrate how an untutored Western small town lawyer could make himself into the most eloquent and influential president the country has ever had." — New York Journal of Books

"Gerhardt's Lincoln's Mentors is a remarkably probing examination of what Lincoln read, how he learned and how he was constantly reaching out for friends, mentors and role models. His is an especially valuable analysis of how both Henry Clay and Andrew Jackson influenced the Lincoln presidency. This superb treatment of Lincoln as a political thinker and operative ranks right up there with the prize-winning biographies of  David Donald and James MacPherson." — Thomas E. Cronin, President Emeritus--Whitman College, co-author of The Paradoxes of the American Presidency and  Leadership Matters