The Color of Dragons (Paperback) 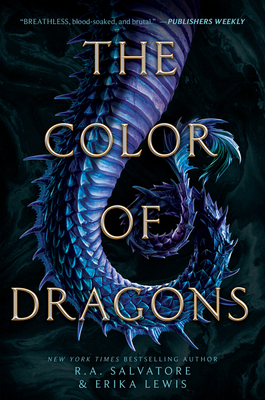 Powerhouse adult fantasy author R. A. Salvatore and Erika Lewis deliver a sweeping, action-packed, romantic pre-Arthurian tale of the origins of magic (and Merlin), perfect for fans of Falling Kingdoms and Seraphina.

And Maggie’s powers are especially fickle. With no one to help her learn to control her magic, the life debt that she owes stretches eternally over her head, with no way to repay it.

Until she meets Griffin, the king’s champion, infamous for hunting down the draignochs that plague their kingdom.

Neither has any idea of the destiny that they both carry, or that their meeting will set off a chain of events that will alter every aspect of the life they know—and all of history thereafter.

This epic, romantic tale will enchant readers and draw them into a thrilling world of star-crossed lovers, magic, destiny, and the paths we choose.

Thirty-four years ago, R. A. Salvatore created the character of Drizzt Do’Urden, the dark elf who has withstood the test of time to stand today as an icon in the fantasy genre. With his work in the Forgotten Realms, the Crimson Shadow, the DemonWars Saga, and other series, Salvatore has sold more than thirty million books worldwide and has appeared on the New York Times bestseller list more than two dozen times. He considers writing to be his personal journey, but still, he’s quite pleased that so many are walking the road beside him! R.A. lives in Massachusetts with his wife, Diane, and their two dogs, Dexter and Pikel. He still plays softball for his team, Clan Battlehammer, and enjoys his weekly DemonWars: Reformation RPG and Dungeons & Dragons 5e games. Salvatore can be found at RASalvaStore.com

Erika Lewis grew up in Alexandria, Virginia, where she spent most of her childhood riding her dirt bike through Fort Ward, the Union Army Civil War stomping grounds. She graduated from Vanderbilt University and went on to earn a master’s degree from Georgia State University and an advanced certificate in creative writing from Stony Brook University. Game of Shadows is her debut novel, and The Color of Dragons is her young adult debut. You can visit her online awww.erikalewis.com.

“Lauded adult fantasy author Salvatore ventures, with Lewis, into young-adult fiction with this standalone title… Hand this to your diehard dragon fans.” — Booklist

“Engagingly written, inclusive of those outside the lore, and leaving much to be discovered in future installments.Timeless is a fantastic place for newcomers to the Drizzt series to onboard as well as a continuation of a beloved and iconic character’s story.” — Nerds on Earth

“It’s impossible to put this riveting page-turner down!”  — Stan Lee, Author, Actor, and Former President and Chairman of Marvel Comics

“One of those thrilling tales you can’t put down…the perfect blend of imaginative world-building and nonstop action wrapped up in a compelling mystery.”  — D.J. MacHale, New York Times bestselling author of Pendragon and The SYLO Chronicles

“Riveting from the start.”  — Steven Gould, author of Jumper