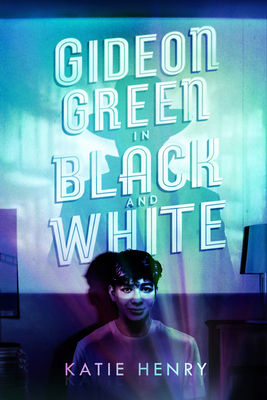 Truly Devious meets Turtles All the Way Down in critically acclaimed author Katie Henry’s YA contemporary comedic mystery, a hilarious send-up of the hardboiled detective genre that spotlights family, friendship, and love.

Gideon’s short-lived run as a locally famous boy detective ended when middle school started, and everyone else—including his best friend, Lily—moved on while Gideon kept holding on to his trench coat, fedora, and his treasured film noir collection. Now he’s sixteen and officially retired. That is, until Lily shows up suddenly at Gideon’s door, needing his help.

He might be mad at her for cutting him off with no explanation, but Gideon can’t turn down a case. As a cover, Gideon joins Lily on the school paper. Surprisingly, he finds himself warming up to the welcoming, close-knit staff . . . especially Tess, the cute, witty editor-in-chief.

But as the case gets bigger than Gideon or Lily could have anticipated, Gideon must balance his black-and-white quest for the truth with the full colors of real life—or risk a permanent fade to black.

Katie Henry, author of Heretics Anonymous, Let’s Call It a Doomsday, and This Will Be Funny Someday, is a writer living and working in New York City. She received her BFA in dramatic writing from NYU’s Tisch School of the Arts and is a published playwright, specializing in theater for young audiences. Her plays have been performed by high schools and community organizations in over thirty states. You can find her online at www.katiehenrywrites.com.

"Funny and poignant. This crowd pleaser gives both a satisfying ending for aspiring sleuths and a character arc that will win readers’ hearts."
— Bulletin of the Center for Children’s Books (starred review)

"A tongue-in-cheek charmer: Sit back and enjoy the show." — Kirkus Reviews

"An entertaining, emotional read. Snippets of the story rendered in noir-style prose add an amusing note to the writing's overall excellence." — Publishers Weekly

"Katie Henry has gifted us with a cleverly-crafted mystery absolutely brimming with humor and heart. Gideon Green is the rare kind of character you’ll find impossible to forget." — Kit Frick, author of I Killed Zoe Spanos and Very Bad People

“Katie Henry tells a poignant, heartfelt story of a teen detective trying to puzzle out a crime as well as the relationships in his life, and I rooted for Gideon all the way.” — Goldy Moldavsky, New York Times bestselling author of The Mary Shelley Club

Praise for This Will Be Funny Someday: "Like any good comedy, this novel deals in truth. Like any great comedy, it also nails the difficult job of infusing nuance." — Booklist (starred review)

"Henry’s background as a playwright shines. Readers will enjoy watching [Isabel] undergo the process of self-transformation, one punch line at a time." — Publishers Weekly

"There are some bracing truths here, and Henry puts into words what her readers perhaps cannot, offering understanding and compassion in a world often too demanding of their growing up." — Bulletin of the Center for Children’s Books

"Isabel is achingly and sympathetically flawed and her growth, realistic; readers will undoubtedly connect with her journey. Honest truths delivered with humor and heart." — Kirkus Reviews

“A rare YA novel in its approach to religious faith as a life-giving, if complicated, aspect of a young adult’s life... Ellis is a protagonist to root for.” — Publishers Weekly (starred review)

“A whip-smart and compelling protagonist who grapples with deep questions about the nature of belief, identity, and control... One of the few YA titles with a Mormon protagonist... Humorous dialogue and richly developed supporting characters add to the appeal.” — School Library Journal (starred review)

“As Ellis learns to consider the hopeful alongside the negative scenarios, the story rushes toward its intriguing, suspenseful conclusion... A too-rare, well-rounded portrayal of a religious adolescent, from the author of Heretics Anonymous.” — The Horn Book

“Henry treats Ellis’ faith with respect and sensitivity while still realistically depicting her struggles to find love and acceptance of herself in a community that is not always supportive of LGBTQ+ individuals... the final few chapters send the reader on a satisfying rollercoaster.” — Bulletin of the Center for Children’s Books

“Most impressive here is Henry’s multifaceted take on religion. Come for the arch first-person narrative and puppy love, stay for the examination into belief.” — ALA Booklist (starred review)

“In addition to being a frequently hilarious comedy with its share of complicated romance, the story presents a thought-provoking look at faith, questioning but ultimately respectful of Catholicism and other beliefs.” — Horn Book Magazine

“The story adeptly asks readers to question what they believe and why, without being preachy, judgmental, or dismissive. Humor interlaced with more serious ideas make for an interesting and enjoyable read. Highly recommended, especially for teens who are passionate about a cause.” — School Library Journal

“Genuine and heartfelt doctrinal questions arise in between the pranks and the conversations Michael has with his new friends, allowing both believing and nonbelieving readers to find their way into this exploration of the way feelings about family and faith intersect. A balanced perspective of possibilities of faith and skepticism.” — Bulletin of the Center for Children’s Books