Trigger Points: Inside the Mission to Stop Mass Shootings in America (Hardcover) 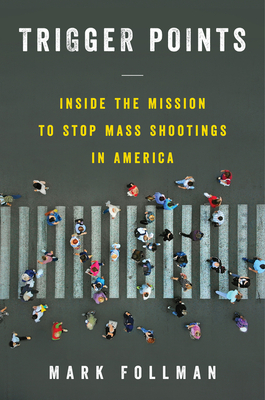 For the first time, a story about the specialized teams of forensic psychologists, FBI agents, and other experts who are successfully stopping mass shootings—a hopeful, myth-busting narrative built on new details of infamous attacks, never-before-told accounts from perpetrators and survivors, and real-time immersion in confidential threat cases, casting a whole new light on how to solve an ongoing national crisis.

It’s time to go beyond all the thoughts and prayers, misguided blame on mental illness, and dug-in disputes over the Second Amendment. Through meticulous reporting and panoramic storytelling, award-winning journalist Mark Follman chronicles the decades-long search for identifiable profiles of mass shooters and brings readers inside a groundbreaking method for preventing devastating attacks. The emerging field of behavioral threat assessment, with its synergy of mental health and law enforcement expertise, focuses on circumstances and behaviors leading up to planned acts of violence—warning signs that offer a chance for constructive intervention before it’s too late.

Beginning with the pioneering study in the late 1970s of “criminally insane” assassins and the stalking behaviors discovered after the murder of John Lennon and the shooting of Ronald Reagan in the early 1980s, Follman traces how the field of behavioral threat assessment first grew out of Secret Service investigations and FBI serial-killer hunting. Soon to be revolutionized after the tragedies at Columbine and Virginia Tech, and expanded further after Sandy Hook and Parkland, the method is used increasingly today to thwart attacks brewing within American communities.

As Follman examines threat-assessment work throughout the country, he goes inside the FBI’s elite Behavioral Analysis Unit and immerses in an Oregon school district’s innovative violence-prevention program, the first such comprehensive system to prioritize helping kids and avoid relying on punitive measures. With its focus squarely on progress, the story delves into consequential tragedies and others averted, revealing the dangers of cultural misunderstanding and media sensationalism along the way. Ultimately, Follman shows how the nation could adopt the techniques of behavioral threat assessment more broadly, with powerful potential to save lives.

Eight years in the making, Trigger Points illuminates a way forward at a time when the failure to prevent mass shootings has never been more costly—and the prospects for stopping them never more promising.

Mark Follman is a longtime journalist and the National Affairs Editor for Mother Jones. Since 2012, when he created a first-of-its-kind public database of mass shootings, his various investigations into gun violence have been honored with numerous awards. His writing and commentary have been featured in The New York Times, The Atlantic, and on National Public Radio, among other media. He resides in the Bay Area with his wife and two children.

“In a fascinating new book...the journalist Mark Follman makes the case that despite our intractable political and cultural differences, mass shootings don’t have to be inevitable.” — New York Times

"An engrossing and surprisingly hopeful look at the field of behavioral threat assessment and how it is being used to prevent mass shootings...an optimistic take on one of America’s most distressing problems." — Publishers Weekly

“A strong argument for a more proactive approach to the American pandemic of bullets.” — Kirkus Reviews

“With the politics of gun control forever gridlocked, we seem powerless to halt the sinister American ritual of mass shootings. But Mark Follman offers us remarkable hope: Stopping would-be shooters before they strike, it turns out, isn’t just possible, it’s happening with regularity. This fascinating deep dive into averted shootings and the true nature of these attacks is an urgent read that illuminates real possibility for change.”
— John Carreyrou, New York Times bestselling author of Bad Blood

“If there’s any way of stopping the plague of mass shootings in America, it will be due to the imaginative efforts of the professionals Follman profiles in this valuable book. Filled with investigative insights, Trigger Points is a gripping narrative of major tragedies and others prevented.”
— Lawrence Wright, Pulitzer Prize-winning author of The Looming Tower, Going Clear, and The Plague Year

“Extraordinary and captivating…with his deep research and analysis and artful prose, Follman compels us to get past our political stalemate on gun violence. We get to know experts who are revolutionizing the work of behavioral threat detection, courageous shooting survivors who are helping them, and the truth about what leads so many perpetrators down a “pathway to violence.” It’s an epic story and an absolute must for all who want to know how we can make our nation safer." — Juliette Kayyem, Chair of the Homeland Security Project at Harvard's Kennedy School of Government and former Assistant Secretary of DHS

“Mark Follman's Trigger Points exposes America's long misunderstood mass shootings and how a generation of failed policies have made these recurring disasters “everyone's problem,” as he writes. In this wide-ranging and compelling account, he makes sense of what we too often explain away as "senseless tragedies," revealing the many missed warning signs and opportunities to intervene. Elegiac and eye-opening—but even more so nonpartisan and hopeful—this book is a vital contribution to understanding how we can seek real answers that save lives.” — Garrett Graff, New York Times bestselling author of The Only Plane in the Sky