When a Killer Calls: A Haunting Story of Murder, Criminal Profiling, and Justice in a Small Town (Cases of the FBI's Original Mindhunter #2) (Paperback) 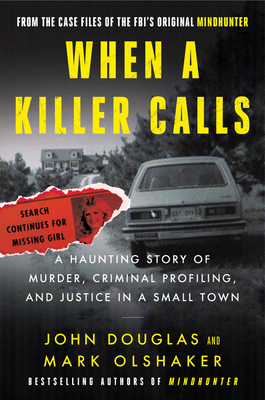 From John Douglas—the legendary FBI criminal profiler, #1 New York Times bestselling author, and inspiration for the Netflix show Mindhunter—comes a chilling journey inside the mind and crimes of Larry Gene Bell, one of the most dangerous serial killers Douglas confronted, and the desperate effort to identify and catch him.

On May 31, 1985, two days before her high school graduation, Shari Smith was abducted from the driveway of her family home in South Carolina. Based on the crime scene and the abductor’s repeated and taunting calls to the family, law enforcement quickly realized they were dealing with a sophisticated and highly dangerous criminal. A letter arrived the next day entitled “Last Will & Testament,” in which Shari, knowing she was to be murdered, wrote bravely and achingly of her love for her parents, siblings, and boyfriend, saying that while they would miss her, she knew they would persevere through their faith. The abduction rocked her quiet town, triggering a massive manhunt and bringing in the FBI, which enlisted profiler John Douglas. A few days later, a phone call told the family where they could find Shari’s body.

Then nine-year-old Debra May Helmick was kidnapped from her yard, confirming the harsh realization that Smith’s murder was no random act. A serial killer was evolving, and the only way to stop him would be to use the study of criminal behavior to anticipate his next move before he could kill again. Douglas devised a risky and emotionally fraught strategy to use Shari’s lookalike older sister Dawn as bait to draw out the unknown subject. Dawn and her parents courageously agreed.

One of the most haunting investigations of Douglas’s storied career, this case details how the eerily accurate profile he created—alongside his carefully crafted and stage-managed manipulation of the killer’s psychology—combined with dedicated police work and cutting-edge forensic science to end a reign of criminal terror. As Shari’s family took incredible personal risks to lure her killer from the shadows, Douglas and the FBI pushed criminal profiling to its limits, culminating in one of his most dramatic and effective confrontations with a sadistic and remorseless killer.

John Douglas, the legendary FBI criminal profiler and veteran author of true crime books, has spent over twenty-five years researching and culling the stories of America’s most disturbing criminals. A veteran of the United States Air Force, he has directly worked and/or had overall supervision in over 5,000 violent crime cases over the past 48 years. He is currently chairman of the board of the “Cold Case Foundation.” One of the foremost experts and investigators of criminal minds and motivations, he currently lives in the Washington, D.C. area.

Mark Olshaker is an Emmy Award-winning documentary filmmaker and author of ten nonfiction books and five novels, including Einstein’s Brain and The Edge. His books with former FBI Special Agent and criminal profiling pioneer John Douglas, beginning with Mindhunter and, most recently, Law & Disorder, have sold millions of copies and have been translated into many languages. Mindhunter is now a dramatic series on Netflix, directed by David Fincher. He and his wife Carolyn, an attorney, live in Washington, D.C.

"A chilling true crime story that feels all too relevant in today's climate, despite the fact that it covers a case from the 1970s."  — PopSugar, on The Killer's Shadow

“The authors write with clarity and authority as they lay out a devastating portrait of an unrepentant racist. This is a must read for those looking for insight into the minds of those instigating racial violence today.”  — Publishers Weekly (starred review) on The Killer’s Shadow

“Fast-paced tale of the search for a racist serial killer in the early days of criminal profiling…A taut, terrifying view of White supremacy taken to murderous extremes, now all too common.”  — Kirkus Reviews on The Killer’s Shadow

“This fascinating and haunting expert account helps us understand why the most shocking homicides occur... [this] will be of particularly urgent interest.” — Booklist (starred review), on The Killer Across the Table

“[A] must read for everyone wanting to understand the minds of depraved serial killers. Once again John Douglas walks into rooms most of us would shun in our worst nightmares and comes back with remarkable insight into what type of person perpetrates such horrible acts.”  — New York Journal of Books on The Killer Across the Table