The Last Boss of Brighton: Boris "Biba" Nayfeld and the Rise of the Russian Mob in America (Hardcover) 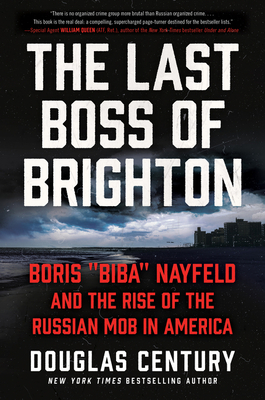 Bestselling author Douglas Century reveals the untold story of the epic rise and fall of Boris Nayfeld, also known as Biba, one of the most notorious Russian mob bosses of our era.

Boris Nayfeld, a.k.a. “Biba,” is the last living boss of the old-school Russian mob in America, and he’s survived to tell it all. Filled with sex, drugs, and murder, Biba’s story is a mind-boggling journey that took him from petty street crime in the USSR to billion-dollar embezzlement in America.

Born in Soviet-era Belarus, abandoned by his parents in infancy, Biba’s brutal upbringing left him hungry for more—more power, control, and money. Taking advantage of the rampant corruption in the Soviet Union, Biba’s teenage hooliganism quickly turned into bolder “black cash” rackets, making him, by Soviet standards, a very rich young man. When authorities took notice and threatened him with “the supreme measure”— execution by firing squad—he managed to get out of the USSR just in time.

Within months of landing in America, his intimidating presence and street smarts quickly made him legendary in the Soviet émigré community of Brighton Beach, Brooklyn, and launched him to the top of New York’s Russian Jewish mob, one of the world’s most inventive, powerful and violent criminal organizations. After decades as a globe-trotting boss, and three stints in U.S. federal prisons he remains unbroken and unrepentant, even as his entire life has unraveled around him.

Now seventy-four years old, Biba is a lion in winter. Douglas Century vividly brings the notorious gangster to life in these pages, telling not only his epic journey but also the history of the Russian mob in America.

Douglas Century is the author and coauthor of numerous bestselling books including Hunting El Chapo, Under and Alone, Brotherhood of Warriors, Barney Ross: The Life of a Jewish Fighter, and Takedown: The Fall of the Last Mafia Empire, a finalist for the 2003 Edgar Award for Best Fact Crime. His most recent book, No Surrender, coauthored with Chris Edmonds, was published by Harper One and was the recipient of a 2020 Christopher Award. A veteran investigative journalist, Century’s work has appeared in the New York Times, Rolling Stone, Billboard, Tablet and the Guardian.

Douglas Century’s The Last Boss of Brighton offers up the sordidly riveting tale of Belarusian heroin trafficker Boris Nayfeld … The stories themselves are as mind-boggling in their extremity as they are disarming in their honesty. As he recounts, in granular detail, crimes ranging from pickpocketing to violent hold-ups to a massive gas-tax swindling scheme that netted him millions, Nayfeld gives us a tour of a parallel criminal world, with all its attendant rules and "ethics." Some of Last Boss’s most head-spinny moments occur when that world intersects with banal aspects of our own. — The Globe and Mail

“Douglas Century fuses cultural history and popular entertainment to create the dramatic effect of a novel. Last Boss of Brighton is an engrossing true story, one of those mob epics that hits all the expected notes—murder and betrayal, swaggering power and outlandish success, featuring, at its core, a complex antihero whose life story seems stranger than fiction. More than a chronicle of a notorious crime boss, it delves deep into the systemic corruption and dysfunction of the Soviet Union that created, honed, and defined Russian organized crime in America. What a relentless, captivating read.”
— Naveed Jamali, author of How To Catch a Russian Spy

“In the Last Boss of Brighton, Douglas Century has written a vivid and cinematic account of a notorious Jewish gangster, Boris Nayfeld. For Jews who grew up in high-stress environments like the Soviet Union or Israel there's a toughness and steeliness that Century captures perfectly in these pages. These are Jewish guys who possess a dangerous combination: the willingness to fight—and shoot—coupled with a hair-trigger temper. We’re so conditioned to reading books and seeing movies about the Italian Mafia, it’s often forgotten how much sechel—brains, savvy and know-how—along with brawn, that Jews historically brought to American organized crime. A must-read!”
— Aaron Cohen, former commando in the Israel Defense Forces and author of the bestselling Brotherhood of Warriors

“There is no group of organized crime more brutal than Russian organized crime. I know it firsthand—I worked Russian O,C. cases for years as a federal agent in Los Angeles. Century has done it again in The Last Boss of Brighton. This book is the real deal: a compelling, supercharged page-turner destined for the bestseller lists.”
— William Queen, Special Agent, Bureau of Alcohol, Tobacco and Firearms (retired) and author of the New York Times bestseller Under and Alone

“The Last Boss of Brighton really takes me back: Douglas Century masterfully recreates a time and place—New York City in the 1980s—in which I played an intricate role ... Every single week I was stealing tens of millions of dollars with my Russian partners…. There’s some glamor and power to being a gangster, but whether we’re talking about Italian Americans or Russians, there simply are no happy endings when you choose to be part of that life. I highly recommend anyone interested in mob books give The Last Boss of Brighton a read.”
— Michael Franzese, former caporegime in the Colombo Crime Family and author of Quitting the Mob and Blood Covenant

“There’ve been many books and movies based on Russian gangsters. They’re mostly cartoons bearing no resemblance to the real-life characters from this complex underworld. In The Last Boss of Brighton, Douglas Century has dug deep to get to the heart of the matter. I’ve got a life-or-death personal connection to this story: in 1999, Biba was given a contract to kill me. It was strictly business—nothing personal. Thankfully, the contract was called off; Biba is as happy as I am that the hit failed because today he likes my radio show as much as I like this book.”
— Steven “Seva” Kaplan, host at Davidzon Radio/RTN, the largest Russian language radio station in the United States