Special Characters: My Adventures with Tech's Titans and Misfits (Hardcover) 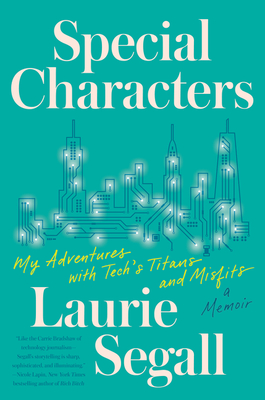 "CNN's former senior tech correspondent shares her front-row seat on the rise of Facebook, Twitter, and other new-media empires—and the geeks turned entrepreneurs who founded them."—People

In 2008, 23-year-old Laurie Segall was a newly minted assistant at CNN and was living in an East Village walk-up apartment. As Wall Street was crashing down, Segall began discovering a group of scrappy misfits who were rising from the ashes of the recession to change the world: the tech entrepreneurs.

A misfit herself, Segall gained entrance to New York’s burgeoning tech scene, with its limitless cash flow and parties populated by geeks-turned-billionaires. Back at the news desk, she rose through the ranks at CNN, while these entrepreneurs went from minnows to sharks, building companies that would become our democracy and our social fabric: Facebook, Twitter, Instagram, Uber, Tinder.

Over the course of a decade, Laurie Segall became one of the first reporters to give airtime to many of these founders—from Mark Zuckerberg (Facebook) to Jack Dorsey (Twitter) to Kevin Systrom (Instagram) to Travis Kalanick (Uber)—while tracking their evolution and society’s cultural shift in the CNN startup beat she created. By the end of her tenure at CNN, she had become its on-air senior technology correspondent and had witnessed the rise of second-wave tech, from the boom to the “complicated years” to the backlash, as her misfits emerged as some of the world’s most influential leaders.

A coming-of-age narrative chronicling an era transformed, Special Characters is, at its core, a young woman’s origin story—in love, in career, and in life—and an account of the humans behind the companies that have shaped our modern society. Filled with emotional heft and razor-sharp observations, Segall’s empowering memoir is a richly rendered backstage pass to the tech bubble that reimagined the ethos of our social, political, and cultural experience.

“Fans of Brotopia or anyone who wants a backstage pass to Zuckerberg and some of the biggest co.’s of our time, you’ll devour this.” —The Skimm

Laurie Segall is an investigative journalist who has created award-winning series and specials. She is currently the founder and executive producer of Dot Dot Dot Media, a correspondent for 60 Minutes+ on Paramount Plus, and a national correspondent for CBS News. Previously, Segall was CNN’s Senior Technology Correspondent and Editor-at-Large for CNN Tech, covering the intersection of technology and culture for more than a decade. She lives in New York City.

"CNN's former senior tech correspondent shares her front-row seat on the rise of Facebook, Twitter, and other new-media empires—and the geeks turned entrepreneurs who founded them." — People

“Fans of Brotopia or anyone who wants a backstage pass to Zuckerberg and some of the biggest co.’s of our time, you’ll devour this.” — The Skimm

“A candid account of tech’s evolution in the 2010s, a period of absurd revenue streams, noteworthy innovation and alarming scandals, Special Characters is also a relatable self-portrait of an ambitious, introspective person’s arrival at a professional crossroads.” — San Francisco Chronicle

“Inspiring on the personal level while somewhat chilling on the societal one.” — Kirkus Reviews

“Anyone eager for a glimpse inside the worlds of technology and network television journalism will enjoy Laurie Segall's candid and engaging memoir. Segall's energetic chronicle of her rise from an entry-level position at CNN to the network's senior tech correspondent is both an engrossing coming-of-age story and a revealing cautionary tale of the power Silicon Valley wields over modern life.” — Shelf Awareness

“In this memoir, [Segall] recalls her own coming of age among the titans who helped shape the world we live in now, and shares unparalleled insight about finding herself amidst a new guard of Masters of the Universe." — Town & Country

“Segall reflects on her years covering the likes of Uber’s Travis Kalanick and Facebook’s Mark Zuckerberg. She also gives the backstory behind some of her more memorable adventures.” — Fortune

“Special Characters is a wild ride through a transformative decade that pulls back the curtain on the exclusive world of billionaire founders, entrepreneurs and mainstream media. With wit and candor, Laurie Segall offers an intimate account of a young woman finding her voice in the boys' clubs of Silicon Valley and cable news. Laurie Segall's memoir is funny, charming, and sincere, and a staggeringly good book.” — Sophia Amoruso, New York Times bestselling author of #Girlboss

“With Special Characters, Laurie Segall rips away the filters and brings to life both the glamour and grit of her journey from newsroom assistant to CNN Senior Technology Correspondent during the second wave tech revolution. Like the Carrie Bradshaw of technology journalism—her storytelling is sharp, sophisticated, and illuminating. This book is a seductive, insightful coming-of-age story of both Segall and the world as we know it.” — Nicole Lapin, New York Times bestselling author of Rich Bitch

“Laurie Segall's memoir is a witty, surprising and page-turning take on the grueling but exhilarating journey of becoming a television news reporter who finds herself covering the most powerful industry in the world -- technology. For anyone trying to find themselves, her tale might just give you the courage to make hard choices and take the road not taken, with the hope of finding what you've only dared to dream." — Emily Chang, author of Brotopia

“Special Characters is a must-read—it is both a mesmerizing memoir and an enthralling whirlwind ride through the highs and lows of the tech industry.” — Susan Fowler, author of Whistleblower