I Want a Hippopotamus for Christmas: A Christmas Holiday Book for Kids (Hardcover) 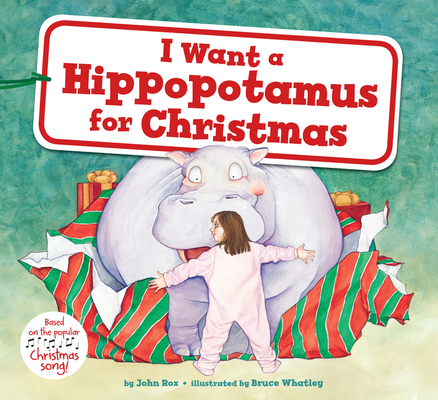 "Any child who has begged or pleaded for a pet for Christmas will love this book." *

Christmas is coming, and one little girl wants nothing more than a hippopotamus to play with and enjoy. But will Santa Claus and her parents make her Christmas wish come true?

Based on the popular Christmas song by John Rox, this edition also includes the sheet music and lyrics to “I Want A Hippopotamus for Christmas.” With catchy refrains, classic artwork, and a heartwarming story, this timeless Christmas tale has been a favorite since 1953.

Music and lyrics for the song included!

The song “I Want a Hippopotamus for Christmas” was written in 1950 by John Rox and became a nationwide hit in 1953 when ten-year-old Oklahoma native Gayla Peevey sang the song as a way to raise money for the Oklahoma City Zoo’s first hippopotamus. In December of that year, the city received Matilda the hippo for Christmas.

Bruce Whatley  is one of Australia's most highly regarded and talented authors and illustrators for children, both here and internationally. Bruce started his working life in advertising as an art director and illustrator and since then he has created over 60 picture books.  Many of his books have won awards both in Australia and overseas, including The Ugliest Dog in the World, Looking for Crabs, Tails from Grandad’s Attic and Detective Donut and the Wild Goose Chase.

In 2002 Bruce paired with author Jackie French and illustrated Diary of a Wombat – an iconic picture book that has become an international best-seller with foreign sales to nine territories.  Diary of Wombat was the start of an extraordinary artistic collaboration that sparked the publication of Pete the Sheep, Josephine Wants to Dance, Shaggy Gully Times, Baby Wombat’s Week, Christmas Wombat and Wombat Goes to School. Plus two delightful books about Queen Victoria, being Queen Victoria’s Underpants and Queen Victoria’s Christmas.

One of the most remarkable aspects of Bruce’s talent is the breadth of his artistic ability, which includes an appealing cartoon style to realistic representations using mediums ranging from coloured pencils, watercolour, acrylic and oils, and more recently, 3D digital software.

And accompanying that talent is an intellectual depth and curiosity that sees Bruce taking on large and complex projects, such as The Beach They Called Gallipoli, which is being co-created with Jackie French and will be published in 2014 to coincide with the centenary of WW1.

In 2008 Bruce completed his PhD titled Left Hand Right Hand: implications of ambidextrous image making. In his thesis Bruce looked at the image making of the non-dominant hand, making the fascinating discovery that in most people the ability to draw lies in the use of the ‘other’ hand.

“An unusual, and therefore very welcome, addition to the long list of Christmas volumes on gift display shelves—the pictures are absurdly irresistible. Children will embrace its good-natured humor and untraditional subject.” — Herald News

“Deliciously expressive artwork—Any child who has begged or pleaded for a pet for Christmas will love this book.” — Through the Looking Glass Children’s Book Review