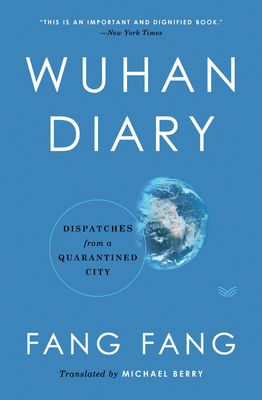 From one of China’s most acclaimed and decorated writers comes a powerful first-person account of life in Wuhan during the COVID-19 outbreak.

On January 25, 2020, after the central government imposed a lockdown in Wuhan, acclaimed Chinese writer Fang Fang began publishing an online diary. In the days and weeks that followed, Fang Fang’s nightly postings gave voice to the fears, frustrations, anger, and hope of millions of her fellow citizens, reflecting on the psychological impact of forced isolation, the role of the internet as both community lifeline and source of misinformation, and most tragically, the lives of neighbors and friends taken by the deadly virus.

A fascinating eyewitness account of events as they unfold, Wuhan Diary captures the challenges of daily life and the changing moods and emotions of being quarantined without reliable information. Fang Fang finds solace in small domestic comforts and is inspired by the courage of friends, health professionals and volunteers, as well as the resilience and perseverance of Wuhan’s nine million residents. But, by claiming the writer´s duty to record she also speaks out against social injustice, abuse of power, and other problems which impeded the response to the epidemic and gets herself embroiled in online controversies because of it.

As Fang Fang documents the beginning of the global health crisis in real time, we are able to identify patterns and mistakes that many of the countries dealing with the novel coronavirus have later repeated. She reminds us that, in the face of the new virus, the plight of the citizens of Wuhan is also that of citizens everywhere. As Fang Fang writes: “The virus is the common enemy of humankind; that is a lesson for all humanity. The only way we can conquer this virus and free ourselves from its grip is for all members of humankind to work together.”

Translated from the Chinese by Michael Berry

One of contemporary China’s most celebrated writers, Fang Fang was born into an intellectual family in Nanjing in 1955, and spent most of her childhood in Wuhan, where she witnessed many of the political movements of Mao’s China, from the Great Leap Forward to the Cultural Revolution. She graduated from Wuhan University with a degree in Chinese literature, and her novels, novellas, short stories, and essays have appeared in nearly 100 different editions. She has been the recipient of numerous honors, including the Lu Xun Literary Prize, and the Chinese Literature and Communications Prize for Outstanding Writer.

Michael Berry is Professor of Contemporary Chinese Cultural Studies and Director of the Center for Chinese Studies at UCLA. He is the author of several books on Chinese film and culture, including Speaking in Images and A History of Pain. He has served as a film consultant and a juror for numerous film festivals, including the Golden Horse (Taiwan) and the Fresh Wave (Hong Kong). He is also the translator of several novels, including To Live, The Song of Everlasting Sorrow, and Remains of Life.

“This is an important and dignified book...[Wuhan Diary] is most scorching in Fang Fang’s calls to hold to account the leaders who downgraded and minimized the virus."  — New York Times

“[Wuhan Diary] is the personal account of a layperson reacting to confusing, conflicting, and distressing circumstances in real time. It is an emotional work that finds its charm in its spontaneity and wit.” — South China Morning Post

“[Wuhan Diary] remains a glimpse into a distressing future.” — The New Yorker

"Fang Fang’s account makes clear that as the geopolitical differences between the Chinese regime and the United States grow by the day, the lives of middle-class Chinese meanwhile seem ever less exotic and ever more similar to those of Americans." — Washington Post

"This is a book that will be referred to in the future when people want to know how many Chinese felt about the pandemic."    — Ian Johnson, author of The Souls of China and Wild Grass

"Imagine this: the author Fang Fang did not exist in today’s Wuhan. She did not keep records or pen down her personal memories and feelings... What would we have heard? What would we have seen?" — Yan Lianke, author of Three Brothers: Memoirs of My Family and The Explosion Chronicles