The Mythics #1: Marina and the Kraken (Hardcover) 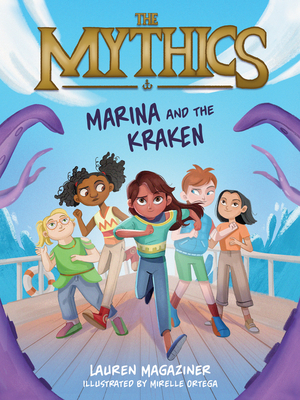 This is book number 1 in the Mythics series.

It’s Pairing Day in Terrafamiliar! Marina has been waiting for this moment—anxiously—for as long as she can remember. Because today’s the day she gets to bond with her animal familiar for life, like every other ten-year-old in the land.

Except after the ceremony ends, Marina doesn’t have one. And she’s not alone . . . four other girls also didn’t get their animal companions. The leaders of Terrafamiliar realize something special is happening: Marina and the other four girls—Kit, Ember, Pippa, and Hailey—are called Mythics

In times of unrest, the Mythics must earn their Mythies—mythical beasts—in quests of courage. But danger lurks everywhere as there are others seeking this mysterious power. And only the Mythics can save Terrafamiliar!

Lauren Magaziner is the author of the Case Closed series, Wizard-match, Pilfer Academy, and The Only Thing Worse than Witches. She is originally from New Hope, Pennsylvania, and she currently lives in Philadelphia, where she writes full-time. On Lauren’s Pairing Day, she bonded with her purrfect familiar: a warm, cuddly, and charmingly cantankerous cat. You can visit Lauren at www.laurenmagaziner.com.

Mirelle Ortega is a Mexican writer and illustrator for kidlit and animation. The many children’s books she's illustrated include her author-illustrator debut picture book, Magic; the Love Sugar Magic series by Anna Meriano; Pepe and the Parade by Tracey Kyle; and Small Room, Big Dreams by Monica Brown. Mirelle lives in Los Angeles, and you can visit her at www.mirelleortega.com.

"A fun first installment in a new series that will prime readers for more." — Kirkus Reviews

"Readers, prepare to embark on an exciting quest complete with daring adventures, mythical creatures, and an unstoppable group of friends! With THE MYTHICS: MARINA AND THE KRAKEN, Lauren Magaziner unleashes an epic new series about the power of friendship and finding what makes you special." — Booki Vivat, New York Times bestselling author of the FRAZZLED series

"Lauren Magaziner's Mythics is exactly the kind of book I would have wanted as a kid—magical, adventurous, heartwarming, and empowering. I love each of the five heroines, and I adore this series!" — Tae Keller, Newbery Award Winning author of When You Trap a Tiger

“Magical creatures meets the super girl squad meets awesomeness! Full of characters impossible not to love, THE MYTHICS is a witty and action-packed adventure about the power of friendship and embracing who you are.” — Amanda Foody, New York Times bestselling author of the WILDERLORE series

"This swashbuckling adventure is the perfect entry point into a new literary world." — Booklist

PRAISE FOR BOOK 1 IN THE CASE CLOSED SERIES: “The ‘choose your own adventure’ format adds a fun twist, offering readers different options, like whom to interview, what to examine, and which clues to follow. An entertaining romp that will appeal to fans of humorous mysteries.”  — School Library Journal

"The characters are real kids dealing with real worries. Carlos is so concerned about money that he takes on the near-impossible task of solving a case for his mother, but it’s this concern that makes him endearing. The various options mean the story takes on a new flavor with every reading. The puzzles are based in learning, so readers work to solve each clue before moving on to the next. Magaziner blends the fun of interactive stories with a suspenseful mystery and delightful characters."  — Booklist

PRAISE FOR THE ONLY THING WORSE THAN WITCHES: “Readers will banish themselves from the ordinary world to finish this book in a flash.”  — Kirkus Reviews (starred review)

“The kids’ slowly forming friendship has real grace and authenticity."  — Bulletin of the Center for Children’s Books