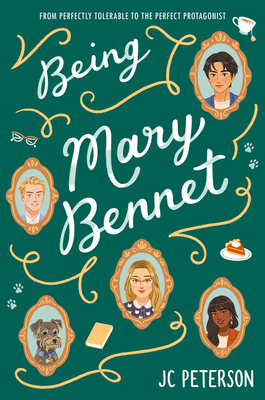 It is a truth universally acknowledged that every bookworm secretly wishes to be Lizzy Bennet from Pride and Prejudice.

A less acknowledged truth is that Mary Bennet might be a better fit.

For Marnie Barnes, realizing she’s a Mary Bennet is devastating. But she’s determined to reinvent herself, so she enlists the help of her bubbly roommate and opens up to the world.

And between new friends, a very cute boy, and a rescue pup named Sir Pat, Marnie finds herself on a path to becoming a new person entirely. But she’s no Lizzy, or even Mary—instead, she’s someone even better: just plain Marnie.

With a hilariously sharp voice, a sweet and fulfilling romance that features a meet-cute in an animal shelter, and a big family that revels in causing big problems, this charming comedy of errors about a girl who resolves to become the main character of her own story (at any and all costs), is perfect for fans of Jenny Han and Becky Albertalli…and Jane Austen, of course.

J.C. Peterson lives in Denver, Colorado, with her husband, two small sons, and one enormous tabby. She earned her degree in journalism from Michigan State University and worked as an award-winning journalist and editor at an alt-newsweekly before becoming a freelance writer and mom. When not dreaming up funny contemporary stories or herding children, she loves to eat and shop local, explore the Colorado mountains, and plan new adventures. Being Mary Bennet is her first novel, and you can find her at jcpetersonwrites.com.

“Full of voice and charm, Being Mary Bennet is an exceptional debut that tackles coming of age with humor, care, and emotional depth. Peterson creates a cast of complex characters and relationships you’ll instantly adore and root for while also embracing their flaws and shortcomings. A delightful, memorable story.”  — Kelsey Rodkey, author of Last Chance Books

"A witty, creative retelling packed with charming characters and hilarious antics. Being Mary Bennet filled my Austen-loving heart with so much joy!"
— Rachel Lynn Solomon, author of Today, Tonight, Tomorrow

"Hilarious and heartfelt, this debut proves that everyone deserves to be the main character in their own story. Jane Austen fans, prepare to fall in love!"
— Kristy Boyce, author of Hot British Boyfriend

"Hilarious and smart, Being Mary Bennet is a soulful, swoonworthy coming of age story that reminds us that everyone deserves to be the main character in their own life. I’m sure Jane Austen would agree!" — Monica Gomez-Hira, author of Once Upon a Quinceañera

“The perfect novel for any reader who wishes they were a heroine but secretly identifies more with background characters… An utterly authentic, captivating story.” — Bulletin of the Center for Children’s Books

“Literary references, friendship, family drama, adorable dogs—this book has it all! Fans of Jane Austen will eat up this playful contemporary homage to Pride and Prejudice.” — School Library Journal

“While [Marnie’s] self-deprecating humor is part of the story’s appeal, there’s also something endearing about watching this earnest character do what has to be done, even if she risks making a fool of herself in the process. A promising first novel.” — Booklist