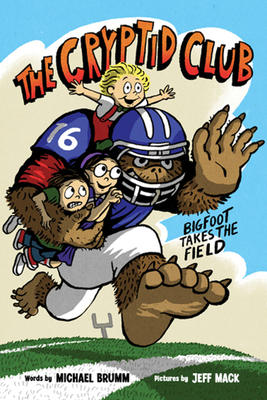 This is book number 1 in the Cryptid Club series.

Fans of The Bad Guys and Catwad will love THE CRYPTID CLUB, a hilarious new four-book graphic novel series about an unlikely team of kid sleuths out to solve the mysteries behind the sudden spate of monster sightings around their school.

Lily knows better than to listen to the gossip her little brother, Henry, has heard, but when her school newspaper needs a big headline, the rumor that Bigfoot has been spotted is the best lead she’s got.

But when claw marks appear on the football equipment and excessive animal hair starts clogging-up the gym showers, Lily knows she can’t be afraid. This is her opportunity to break the story wide-open. But can Lily, Henry, and Oliver, the neighbor-kid they’re babysitting, discover what Bigfoot wants before it’s too late?

Everything is not as it seems in this hilarious new graphic novel series debut by Emmy Award–winning writer for The Late Show with Stephen Colbert Michael Brumm and bestselling illustrator Jeff Mack.

Michael Brumm is a writer/producer for The Late Show with Stephen Colbert. He’s also been a consulting producer for At Home with Amy Sedaris and a four-time Emmy-winning writer for The Colbert Report. He is the coauthor of the children’s book His Royal Dogness and has written for various magazines and video games. Michael currently lives in New York City with his wife, Camille, and their two little cryptids, Henry and Bea.

Jeff Mack spent most of his childhood drawing monsters, making comic books, and building haunted houses in his basement. He has spent most of his adulthood doing the same things. Since 2003, he has written and illustrated a long list of award-winning picture books, chapter books, and early readers, including the Clueless McGee series, Good News, Bad News; Hush Little Polar Bear; Duck in the Fridge; and Frog and Fly. He has also illustrated many books for other authors, including James Howe’s Bunnicula and Friends series and Eve Bunting’s Hurry! Hurry! At home in Northampton, Massachusetts, he travels both nationally and internationally visiting schools and libraries to talk with kids about creating books.