Pops: Learning to Be a Son and a Father (Hardcover) 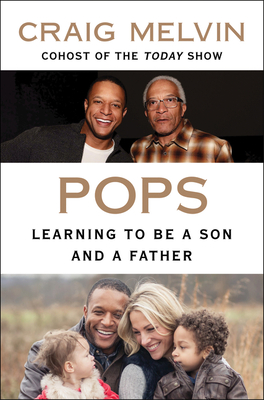 Pops is the story of all these men--and of the inspiring fathers Craig has met reporting his "Dads Got This Series" on the Today show. Pops is also the story of Craig and Lawrence Melvin's long journey to reconciliation and understanding, and of how all these experiences and encounters have informed Craig's understanding of his own role as a dad.

Craig Melvin is the news anchor of NBC News’ Today show, a co-host of 3rd Hour Today, an anchor on MSNBC Reports, and a host of Dateline NBC. Before joining Today, he was a national correspondent, and before that he was an anchor on NBC’s affiliate in Washington, D.C. He has interviewed presidents, ambassadors, and celebrities, but most enjoys profiling ordinary Americans who have accomplished the extraordinary. He’s also covered a wide variety of breaking news events during his career, including several inaugurations, national political conventions, and too many mass shootings, including in Charleston and Sandy Hook. Melvin has also taken part in NBC Sports’ coverage of numerous major events, including two Olympic Games and six Super Bowls. He graduated from Wofford College, in Spartanburg, South Carolina, where he now serves on the board of trustees. He also serves on the Colorectal Cancer Alliance Board of Directors. He lives in the New York City area with his family.

“An emotionally and atmospherically deep celebration of a family that has stuck together through thin and thinner.” — Kirkus Reviews