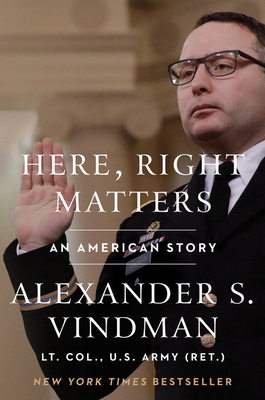 The instant New York Times bestseller, now in paperback and with a new afterword

Retired U.S. Army Lieutenant Colonel Alexander Vindman, who found himself at the center of a firestorm for his decision to report the infamous phone call that led to presidential impeachment, tells his own story for the first time. Here, Right Matters is a stirring account of Vindman's childhood as an immigrant growing up in New York City, his career in service of his new home on the battlefield and at the White House, and the decisions leading up to, and fallout surrounding, his exposure of President Trump's abuse of power.

0900, Thursday, July 25, 2019: President Trump called Ukraine’s President Zelensky, supposedly to congratulate him on his recent victory. In the months that followed, the American public would only learn what happened on that call because Alexander Vindman felt duty-bound to report it up the chain of command: that the President of the United States had extorted a foreign ally to damage a political challenger at home. Vindman’s actions and subsequent testimony before congress would lead to Trump’s impeachment and affirm Vindman's belief that he had done the right thing in the face of intense pressure to stay silent. But it would come at an enormous cost, straining relationships with colleagues, superiors, and even his own father, and eventually end his decorated career in the US Army, by a Trump administration intent on retribution.

Here, Right Matters is Vindman’s proud, passionate, and candid account of his family, his career, and the moment of truth he faced for his nation. As an immigrant, raised by a father who fled the Soviet Union in pursuit of a better life for his children, Vindman learned about respect for truth throughout his education and military service. As this memoir makes clear, his decision to speak up about the July 25th call was never a choice: it was Vindman’s duty, as a naturalized citizen and member of the armed forces. In the wake of his testimony, he would endure furious partisan attacks on his record and his loyalty. But far louder was the extraordinary chorus of support from citizens who were collectively intent on reaffirming an abiding American commitment to integrity.

In the face of a sure-fire career derailment and public excoriation, Vindman heeded the lessons from the people and institutions who instilled in him the moral compass and the courage to act decisively. Like so many other American immigrant families, the Vindmans had to learn to build a life from scratch and take big risks to achieve important goals. Here, Right Matters is about the quiet heroes who keep us safe; but, above all, it is a call to arms for those who refuse to let America betray its true self.

Lieutenant Colonel Alexander S. Vindman (Ret. ) was most recently the director for European Affairs on the White House's National Security Council. Prior to retiring from the U.S. Army, he served as a foreign area officer with assignments in U.S. Embassies in Kyiv, Ukraine and Moscow, Russia and for the Chairman of the Joint Chiefs of Staff as a Political-Military Affairs Officer. He is currently a doctoral student and Foreign Policy Institute Fellow at the Johns Hopkins School of Advanced International Studies, a Pritzker Military Fellow at the Lawfare Institute, a board member of the Renew Democracy Initiative nonprofit, and a Visiting Fellow at the University of Pennsylvania's Perry World House.

“Compelling . . . . Even those who know the details of Trump’s impeachment will find it chilling to hear them related by one of the event’s chief figures. . . . The story of an ordinary man placed in extraordinary circumstances who did the right thing.” — New York Times Book Review

“Vindman reminds us of what genuine patriotism can look like. . . . Vindman’s regional knowledge allows him to unpack the reasons that so many Democrats thought Trump’s phone conversation should be the basis of the nation’s third presidential impeachment. In meticulous fashion, he details the stunning number of high-ranking officials—such as Gordon Sondland, U.S. ambassador to the European Union—who were in on the game.” — Washington Post

“An important book from a true patriot whose oath to the Constitution could not allow him to look away.” — Kirkus Reviews