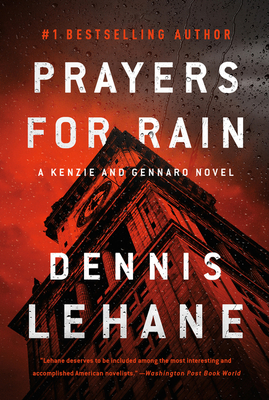 This is book number 5 in the Patrick Kenzie and Angela Gennaro Series series.

When Patrick first meets Karen Nichols, she strikes him as a naive woman from a protected upbringing, untouched by tragedy. But six months later Karen commits suicide by leaping from one of Boston’s monuments. Patrick finds himself wondering what can alter someone so drastically, so quickly, that suicide seems her only option. Yet Patrick soon suspects that tragic events that befell Karen during the last months of her life—an “accident” that destroyed her fiancé; the loss of her job, her apartment, and eventually her mind—may not have been as random as they first appeared.

Enlisting the aid of his ex-partner and ex-flame, Angela Gennaro, as well as that of his friend, the lethally unbalanced Bubba Rogowski, Patrick enters into a treacherous game of cat-and-mouse with a man who, instead of merely killing his victims, prefers to make them wish they were dead. As Patrick, Angie, and Bubba wage psychological warfare with this brilliant, depraved sociopath, they discover they might be fighting a losing battle against an enemy who is determined to tear their worlds apart.

Dennis Lehane is the author of thirteen novels—including the New York Times bestsellers Live by Night; Moonlight Mile; Gone, Baby, Gone; Mystic River; Shutter Island; and The Given Day—as well as Coronado, a collection of short stories and a play. He grew up in Boston, MA and now lives in California with his family.

“In the miserably hot summer of 1999...the superb detective novels of Dennis Lehane—became a kind of lifeline for me.” — Stephen King, New York Times Book Review

“As in all the best hard-boiled series, each entry reveals more about the principal characters and their relationships in a violent, uncaring world where the only verities are the ones you establish for yourself and defend vigorously. Lehane has worked his way into the top echelon of crime writers.”  — Booklist

“[Lehane]...writes like an angel on crystal meth.”  — Kirkus Reviews