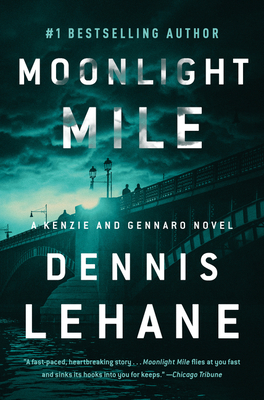 This is book number 6 in the Patrick Kenzie and Angela Gennaro Series series.

“Patrick and Angie are back, and so are the consequences from decisions they made years ago in the Gone, Baby, Gone case. The same child, Amanda McCready, now 16, has disappeared and the pair of P.I.s vow this time will be different when they track her down. Lehane is a master at exploring -- yet not answering or resolving -- difficult issues of morality and individual and social responsibility, all while giving the reader great dialogue, unexpected plot twists, and unforgettable characters. This is a sequel worthy of its predecessor.”
— Leslie Reiner, Inkwood Books, Tampa, FL

This “taut, reflective”* sequel to Gone, Baby, Gone is an explosive tale of integrity and vengeance from the acclaimed master of the new noir, New York Times bestselling author Dennis Lehane.

Amanda McCready was four years old when she vanished from a Boston suburb in 1997. Desperate pleas for help from the child’s aunt led savvy, tough-nosed investigators Kenzie and Gennaro to take on the case. The pair risked everything to find the young girl—only to orchestrate her return to a neglectful mother and a broken home.

Now Amanda is sixteen—and gone again. A stellar student, brilliant but aloof, she seemed destined to escape her upbringing. Yet Amanda’s aunt is once more knocking at Patrick Kenzie’s door, fearing the worst for the little girl who has blossomed into a striking, clever young woman who hasn’t been seen in two weeks.

Haunted by the past, Kenzie and Gennaro revisit the case that troubled them the most, following a twelve-year trail of secrets and lies down the darkest alleys of Boston’s gritty, blue-collar streets. Assuring themselves that this time will be different, they vow to make good on their promise to find Amanda and see that she is safe. But in their desperate fight to rewrite the past, Kenzie and Gennaro will face an evil that goes beyond broken families, hearts, and dreams—a darkness at the heart of an impossible decision the two investigators made long ago.

Dennis Lehane is the author of thirteen novels—including the New York Times bestsellers Live by Night; Moonlight Mile; Gone, Baby, Gone; Mystic River; Shutter Island; and The Given Day—as well as Coronado, a collection of short stories and a play. He grew up in Boston, MA and now lives in California with his family.

“Nobody pokes his nose into the crummy apartments and seedy bars and trash-packed alleys and emotional messes of lower-class life with more observational rigor than Lehane. . . . Moonlight Mile flies at you fast and sinks its hooks into you for keeps. . . . Lehane’s writing, as always, is tight, vivid and brilliantly assured.” — Chicago Tribune

“Unlike the usual sequel writer who simply puts old creations through new paces, Mr. Lehane registers a deep affection for the Kenzie-Gennaro team and a passionate involvement in their problems. And he treats each book in this series as an occasion for wondering what kind of world can produce the depravity that each new plotline describes. . . . So Patrick and Angie follow the bread-crumb trail of clues and suspects, giving Mr. Lehane many occasions to write acid-etched dialogue and show off his fine powers of description.” — New York Times

“In many ways, the novel is an homage to happy family life. It’s a deft delivery system for a story that mixes guts, betrayal and the importance of good values. It’s also a sublime love story about what really matters in the grand scheme of things.” — USA Today

“Throughout, Lehane’s writing mixes the streetwise and the lyrical. . . . Elsewhere, an extended metaphor aches with confusion and loss - not just the core characters’ but that of a larger community, perhaps America itself. . . . Lehane has made quantum leaps as a craftsman. . . . Lehane is a writer bringing new confidence and an easy prowess to a new chapter in an epic story—the Kenzie-Gennaro saga” — Washington Post

“For fans of the Boston-based detective couple—a blue-collar Nick and Nora Charles, putting their relationship to the test in the face of thugs and bums, ethical dilemmas, and a balance-challenged checking account—the return is more than welcome. . . . The plot of Moonlight Mile—a title taken from the Jagger/Richards song—is mapped out with Hammett-like precision, but as with Hammett (and Raymond Chandler and Ross Macdonald and Charles Willeford), when Lehane’s on his game, it isn’t the plot that matters. It’s the characters, and the smart, hard-boiled prose.” — Philadelphia Inquirer