The Hidden Child: A Novel (Paperback) 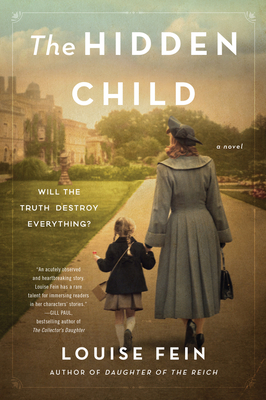 “The Hidden Child is a heart-wrenching depiction of a golden couple in the 1920s…. Shocking, emotive, and compelling, but ultimately a story of hope. I loved it.” -- Deborah Carr, USA Today bestselling author

Londoners Eleanor and Edward Hamilton have it all. But the 1929 financial crash is looming, and they’re harboring a shameful secret. How far are they willing to go to protect their charmed life?

Eleanor Hamilton is happily married and mother to a beautiful four-year-old girl, Mabel. Her husband, Edward, is a leading light in the burgeoning Eugenics movement, which is designing the very ideas that will soon be embraced by Hitler.

But when Mabel develops debilitating epileptic seizures and Eleanor discovers Edward has been keeping secrets, Eleanor's world fractures. In order to save her daughter, she takes matters into her own hands.

Vividly rendered and deeply affecting, The Hidden Child is a sweeping story and a richly drawn portrait of a family torn apart by shame, deceit, and dangerous ideals.

Louise was born and brought up near London. After a law degree at Southampton University, she worked in Hong Kong and Australia, and enjoyed travelling the world before returning to London to settle down to a career in law and banking. She holds a master’s degree in creative writing from St Mary’s University, London. Louise lives in the beautiful Surrey countryside with her husband, three children and small dog.

“Fein fashions an affecting historical novel by weaving together themes of eugenics, epilepsy, PTSD, and the crash of 1929…. A good choice for readers who enjoy 20th-century historical fiction, Fein’s novel is well researched…. The classism and racism fundamental to eugenics come through clearly, as do the heartbreaking consequences of a child’s serious illness.” — Library Journal

“The Hidden Child is a heart-wrenching depiction of a golden couple in the 1920s…. Shocking, emotive, and compelling, but ultimately a story of hope. I loved it.”  — Deborah Carr, USA Today bestselling author of The Poppy Field

"From the first pages of Louise Fein’s The Hidden Child, cracks appear in the picture-perfect veneer of the Hamilton family. I found myself tangled in the complicated web of Eleanor and Edward's marriage, and filled with both dread and hope for their daughter Mabel. Full of surprises, The Hidden Child takes us into the heart of a 1930s marriage as Eleanor and Edward navigate the boundaries of class, family ties, and the overwhelming fear of bringing moral shame into the light. A bittersweet tale that will keep you turning the pages until the wee hours to see what happens next." — Laura Morelli, USA Today bestselling author of The Night Portrait

"A family torn apart by misconceptions and forced to face their biggest fears, The Hidden Child is a meticulously researched, brave and timely look into the deep-seated prejudices that drove entire nations."   — Serena Burdick, bestselling author of The Girls with No Names

"An acutely observed and heart-breaking story. Louise Fein has a rare talent for immersing readers in her characters’ stories and inviting us to decide what we would do. Her writing is pacy, warm and engaging, and she has become one of my new favorite authors."  — Gill Paul, bestselling author of Another Woman's Husband and upcoming release The Collector's Daughter

“Louise Fein has done it again! At its core, The Hidden Child is a story of hope and redemption, of humanity and growth. Charting one family as it navigates trauma from the first world war, the impending depression, and the rising eugenics movement that will give rise to Hitler's "Final Solution," The Hidden Child is both intimate and universal in scope. I loved this compelling read and its complex, flawed, but deeply human characters.” — Addison Armstrong, author of The Light of Luna Park

“Filled with suspense, clever twists, and fascinating historical details, The Hidden Child is an absorbing story about the transformative power of love. Louise Fein has created a nuanced portrait of a family in crisis, and with every passing page of this book, I became more and more committed to rooting for the main character, a woman who finds her voice as she fights for her child’s survival. This book is firmly rooted in Interwar England, but it contains the timeless message that the only real path to redemption is through the truth.” — Elise Hooper, author of Fast Girls

“Louise Fein’s The Hidden Child is a poignant rendering of love and motherhood, human frailty and redemption, exquisitely told against the backdrop of the unthinkable. A heroine for the ages, Eleanor Hamilton’s predicament will tear your heart apart while her resolve is a testament to the power of intuition. Fein deftly takes the reader back to a terrifying turning point in history and, with grace and compassion, reminds us of the importance of standing up for what we believe in our souls to be true.” — Judithe Little, author of The Chanel Sisters

“The Hidden Child is wonderfully spun through prose that is at times lyrical and poetic but always clear and forward moving. I was completely under its spell in this powerful, engaging, and ultimately heart-warming story.” — Gill Thompson, author of The Ocean's Between Us and The Child on Platform One

“Set in the wake of the First World War, this well-researched story examines the eugenics movement through the eyes of one of its leading advocates…. A most enjoyable novel and a worthy follow-up to Fein’s fantastic debut.”  — Fiona Mitchell, author of The Maid’s Room and The Swap

“The Hidden Child is simultaneously heart-breaking and heart-warming as we witness the love of a mother determined to rescue her child from the ‘monster’ that is epilepsy, a disease that even today strikes fear and shame. The story is all the more poignant since the author writes from the deeply personal experience of having a child who suffered so terribly from the disease. A ‘must read’.” — Liz Trenow, author of The Forgotten Seamstress

"Another stunning book by Louise Fein! A captivating story with beautifully drawn characters and an intriguing plot—a must-read for historical fiction fans."  — Andie Newton, bestselling author of The Girls from the Beach

“Told in stunning detail … this novel moves forward with a plot that compels the reader to continue page after page. Inspired by the author’s own family experience, the well-formed characters vividly illuminate the ethical issues of an era laced with prejudice and fear…. Highly recommended.” — Historical Novels Review

“Combining the most beautiful writing with meticulous research, and a deeply layered story that will keep you reading well into the night, The Hidden Child is a stunning novel. From the very start, I was immersed in the world of Eleanor, Edward, and little Mabel. I felt with them, lived with them, and will be thinking about them for a very long time to come.” — Jenny Ashcroft, author of Meet Me in Bombay

“An astonishing story about an aspect of British history that’s long been swept under the carpet - surprising, moving and poignant.” — Frances Quinn, author of The Smallest Man

“Another truly fabulous read: both absorbing and enlightening. All the characters are well-drawn, all the dilemmas are sympathetic, and the pacing is spot-on. Eugenics might be a dark subject matter but The Hidden Child is also suffused with empathy and hope. Relevant, passionate and powerful, it’s a book to be savored then talked about again and again.” — Lizzie Page, author of When I Was Yours

“Louise Fein's Daughter of the Reich is so real—a beautifully written and emotional wrenching journey into World War II tumult and tragedy. Amazingly, this novel is both sweeping and intimate. Although the book brings history to life, its dynamic characters present a timely truth we should all grasp and embrace: We must stand up against those who preach hate.”
— Karen Harper, New York Times bestselling author of The Queen’s Secret

“Fein shows the slow twisting of the people in Hetty’s city, suggesting parallels in the United States today, which book discussion groups can parse out into fuller understanding.” — Library Journal on Daughter of the Reich

“Louise Fein’s Daughter of the Reich spins childhood innocence shattered, the tendency for society to carry us along in wrong directions, and the importance of standing up against tyranny in ways small and large into an absorbing, heart-wrenching story of love and letting go—and a lesson for us all." — Meg Waite Clayton, New York Times bestselling author of The Last Train to London

“By far, Daughter of The Reich is one of the most unique World War II stories that I have read, and in full honesty, I couldn’t help but love the story… a beautifully written story, filled with some hard to swallow pills, but nonetheless, it is a beautiful story—a story in which you wouldn’t want to put down until the end.” — Manhattan Book Review

“Revelatory and harrowing with touches of grace…the characterizations are well done, with the lovers and Hetty’s relationship with her beloved brother particularly well rendered. An extraordinary debut novel. Bravo!”
— Historical Novel Society on Daughter of the Reich

“An addictive, heart-filled, crucial read for our times—reminding us why it’s so imperative never to forget history and providing a cautionary tale about what will happen if we do.”
— Jenna Blum, New York Times and internationally bestselling author of Those Who Save Us on Daughter of the Reich

“I adored this book because not only is it beautifully written, it also tells a familiar story from a very unfamiliar perspective: that of a naïve German teenager caught up in the rise of Nazism ,and her gradual realization of the inhumanity driven by Aryan fanaticism. Louise Fein’s characters help us understand how so many people were taken in by Nazi propaganda, and the terrible, heartbreaking dilemmas they faced trying to protect the people they loved. This is historical fiction at its absolute best.”
— Liz Trenow, New York Times bestselling author of The Forgotten Seamstress on Daughter of the Reich

“I couldn’t believe it when I read that this is a debut, because it’s so skillfully written. We feel Hetty’s character development through the pages; the scene-setting and historical background are unobtrusive but utterly convincing. This is an important subject to write about and I learned a lot, but above all it is a powerful, unforgettable love story.”
— Gill Paul, bestselling author of The Secret Wife on Daughter of the Reich

“The Hidden Child explores a dark chapter in history through the moving and deeply compelling battle of one mother to save her daughter’s life. Eleanor Hamilton is such a brilliant heroine, her love for her daughter Mabel so touching, the fear of what will happen to both of them so real, that I found myself racing through the pages until the very end. A truly wonderful novel!” — Nikola Scott, author of Summer of Secrets