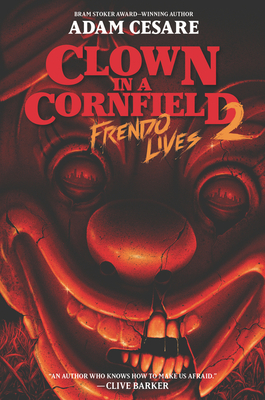 It’s an all-new horror classic about what happens when the truth is the last thing we want to believe, from Bram Stoker Award–winner and master of thrills and chills, horror legend Adam Cesare.

After barely making it out of the Kettle Springs cornfields alive, Quinn’s first year away at college should be safe and easy. All she wants is to be normal again.

But instead, Quinn finds that her past won’t leave her alone when she becomes the focus of online conspiracy theories that claim the Kettle Springs Massacre never happened. It’s a deranged but relentless fantasy, and there’s nothing Quinn can do to get people to hear the truth—not even on her own campus or in her own dorm room.

So when a murderous clown attacks Quinn at a frat party while another goes after her father in Kettle Springs at the same time, Quinn realizes that the facts alone are never going to save her. Her only option is to go back into the cornfields, back where the nightmare began, to set the record straight the only way she knows how. Because when the truth gets lost in the lies, that’s when people start to die.

Adam Cesare is a New Yorker who lives in Philadelphia. His books include Clown in a Cornfield, Video Night, The Summer Job, and Zero Lives Remaining. He’s an avid fan of horror cinema and runs Project: Black T-Shirt, a YouTube review show where he takes horror films and pairs them with reading suggestions.

“In this fun, frenetic sequel, Cesare tackles mob mentality and misinformation, and the return of Frendo oozes with old wounds and angry conspiracy-fueled grudges. With the rising body count and nonstop action, the pace will feel familiar to slasher fans as it delivers satisfying fight and death scenes.” — Kirkus Reviews

“This book is a violent and timely tale with thinly veiled yet compelling subtext that should resonate. It’s a breakneck slasher sequel that doesn’t waste any time getting to the action and suspense.” — Bloody Disgusting

"A perfect extension of the world Cesare created in the first book... will thrill readers of any age." — Rue Morgue Magazine

"Frendo Lives feels simultaneously like a perfect companion to the first novel and a wonderful jumping off point for more adventures in Frendo's dark world." — Paste Magazine