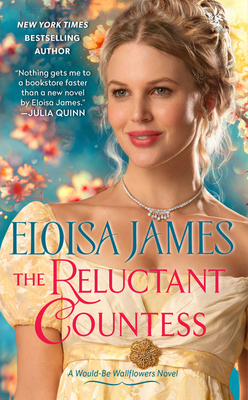 New York Times bestselling author Eloisa James returns to the Would-Be Wallflowers series with an enemies-to-lovers romance between a proper earl and an entirely improper lady—whom he can’t stop thinking about.

Giles Renwick, Earl of Lilford, has never made a fool of himself over a woman—until he meets Lady Yasmin Régnier. Yasmin is ineligible for his attentions in every way: not as a wife, certainly not as a mistress (she is a lady!), nor even as a friend, since they vehemently dislike each other.  Her gowns are too low, and her skirts are dampened to cling to admittedly lovely thighs. She loves to gossip—and giggle.

She isn’t dignified, or polite, or even truly British, given that her father’s French ancestry clearly predominated. Not to mention the fact that her mother had been one of Napoleon’s mistresses, a fact she makes no effort to hide.

And what will he do if she says yes?

Eloisa James is a USA Today and New York Times bestselling author and professor of English literature, who lives with her family in New York, but can sometimes be found in Paris or Italy. She is the mother of two and, in a particularly delicious irony for a romance writer, is married to a genuine Italian knight. Visit her at www.eloisajames.com.

“Eloisa James writes with a captivating blend of charm, style, and grace that never fails to leave the reader sighing and smiling and falling in love. Her style is exquisite, her prose pure magic. Nothing gets me to a bookstore faster than a new novel by Eloisa James.” — Julia Quinn

“The romance galaxy is filled with luminous stars, but few twinkle as brightly as James, who, with the launch of her Regency-set Would-Be Wallflowers series, once again dazzles readers with superbly conceived characters, a sublimely sensual love story, and sparkling wit.” — Booklist (starred review) on How to Be a Wallflower

"A story as wild as the heroine's family name and one that will reward romance fans who want a funny book about an unusual heroine." — Kirkus Reviews on Wilde Child

“A sparkling Georgian romance. James’ writing shines and the Wilde clan’s infectious energy is the epitome of delightful. Overflowing with tried-and-true romance tropes like opposites attract and secret pining, Wilde Child proves that sometimes there’s no need to reinvent the wheel.” — BookPage

“Longtime historical romance fans and newbies to the genre (particularly those whose interest was piqued by Bridgerton) will delight in this well-done addition to a solid series.” — Library Journal on Wilde Child

“As usual, Eloisa James manages to weave a sweet, funny, and poignant tale. I don't think readers of the Wilde family antics will be disappointed.” — Romance Reviews Today