One Damn Thing After Another: Memoirs of an Attorney General (Hardcover) 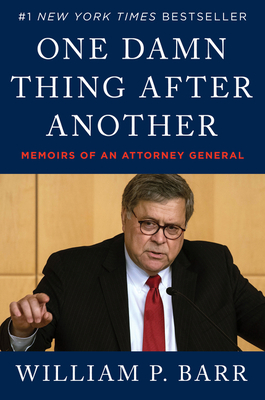 William Barr’s first tenure as attorney general under President George H.W. Bush was largely the result of chance, while his second tenure under President Donald Trump a deliberate and difficult choice. In this candid memoir, Barr takes readers behind the scenes during seminal moments of the 1990s, from the LA riots to Pan Am 103 and Iran Contra. Thirty years later, Barr faced an unrelenting barrage of issues, such as Russiagate, the COVID outbreak, civil unrest, the impeachments, and the 2020 election fallout. One Damn Thing After Another is vivid, forthright, and essential not only to understanding the Bush and Trump legacies, but also how both men viewed power and justice at critical junctures of their presidencies.

A native New Yorker, William P. Barr earned his A.B. and M.A. degrees at Columbia University and his J.D. at George Washington University, after which he spent a decade practicing law at a Washington firm, interrupted by a stint serving in the Reagan White House. President George H. W. Bush successively appointed Barr Assistant Attorney General, Deputy Attorney General, and, finally, the 77th Attorney General. Barr retired in 2008 after fifteen years as general counsel of GTE Corporation and its successor company, Verizon, after which he served on a number of corporate boards and consulted for corporate clients. Barr agreed to serve as the 85th Attorney General for the last two years of President Trump's term.