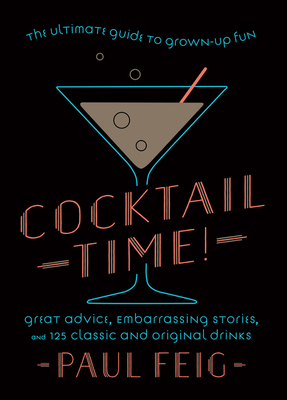 Elegant man-about-town and the director of Bridesmaids, Spy, and A Simple Favor Paul Feig serves up a beautifully designed cocktail and lifestyle guide with hilarious stories from his life.

Famed TV and film writer, director, and producer Paul Feig is obsessed with cocktails and cocktail culture. It’s about having great conversations with friends. It’s about putting on your best clothes and throwing a smart gathering or heading to your favorite bar and having an interesting chat with the bartender. And it’s about staying home, mixing a drink and sipping it in a beautiful glass as you watch a great old movie by yourself.

Paul has made an art and a science out of creating these elegant and festive environments and living his best life, whether at home in LA or New York or London or on location around the world, and it’s all here in Cocktail Time!—how to make the drinks, how to throw the parties, what music to play, what glassware you need and more, along with 125 cocktail recipes, each served along with funny insider stories about Paul’s Hollywood life and famous friends.

Cocktail Time! covers everything, from classics (and variations on them) like martinis, negronis, and hot toddies to original concoctions such as “The Feigtini” and holiday cocktails, as well as recipes from film and TV industry friends, such as the Charlize Theron Gibson, the Very Cherry Kerry (Washington), the (Angela) Kinsey Gin Fizz, Henry (Golding)’s Honey Plum G&T, and The Five (Michelle) Yeoh-Larm Fire.

Cocktail Time! is a love letter to the aesthetics and culture around cocktails. It’s guaranteed to make you want to up your party-giving game—or at least your home bar situation. And it’s an immensely charming and readable window into one man’s friendly obsession.

The 45 Must-Read Books of Fall 2022. “The latest project from filmmaker Paul Feig (Bridesmaids, Spy) isn't on the big screen, but instead on the printed page. This tribute to Feig's love of a good cocktail (or two, or...) shares not only 125 recipes for his favorite drinks (and those of his famous friends) but also tips for throwing the perfect cocktail party and stories from his own star-studded life. We'll drink to that.” — Town & Country

“It’s shocking that one person could have so many humiliating experiences and even more shocking that he chose to remember them. Kick Me is like an unofficial prequel to Freaks and Geeks. If anything, Paul Feig’s real stories are actually more harrowing than what his fictional characters went through.”  — Ira Glass, host of This American Life, on Kick Me

“I love Paul Feig’s sense of humor—in a platonic way. This book is hilarious. I recommend it to people like me. And to people who don’t like me.”  — Garry Shandling on Kick Me

“Feig is best known as the creator of the hilarious and lamentably short-lived television show Freaks and Geeks, which was set in the 1980s and chronicled the lives of high-school outsiders. Both those who miss the show and those who’ve never heard of it will enjoy Feig’s comical collection of essays about his own youth. . . . Whether he’s triumphant or humiliated, Feig is a droll storyteller.” — Booklist on Kick Me

“It is certain to release a rush of memories in all who have finally come to grips with the awkwardness of having grown up. Primarily for the humor section of public libraries, this work might also provide some insight for psychologists specializing in adolescence.” — Library Journal on Kick Me

“It bodes well that the dedication to this book is laugh-out-loud funny, and indeed, Feig (Kick Me) does not disappoint in this comedic tale of his early sex life, or lack thereof . . . . The account of his journey to sexual manhood is witty and entertaining and one to which any former sex-addled adolescent (male or female) will relate.”  — Publishers Weekly on Superstud