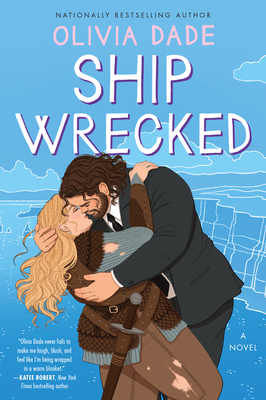 “I love how Dade writes plus-sized heroines and how they are always strong, confident women. They always love themselves for who they are, not who society tells them they should be. This book is hilarious, adorable — and yes, very steamy.”
— Kaitlyn Craig, Joseph-Beth Booksellers, Cincinnati, OH

After All the Feels and Spoiler Alert, Olivia Dade once again delivers a warm and wonderful romantic comedy about two co-stars who once had an incredible one-night stand—and after years of filming on the same remote island, are finally ready to yield to temptation again…

Maria’s one-night-stand—the thick-thighed, sexy Viking of a man she left without a word or a note—just reappeared. Apparently, Peter’s her surly Gods of the Gates co-star, and they’re about to spend the next six years filming on a desolate Irish island together. She still wants him…but he now wants nothing to do with her.

Peter knows this role could finally transform him from a forgettable character actor into a leading man. He also knows a failed relationship with Maria could poison the set, and he won’t sabotage his career for a woman who’s already walked away from him once. Given time, maybe they can be cooperative colleagues or friends—possibly even best friends—but not lovers again. No matter how much he aches for her.

For years, they don’t touch off-camera. But on their last night of filming, their mutual restraint finally shatters, and all their pent-up desire explodes into renewed passion. Too bad they still don’t have a future together, since Peter’s going back to Hollywood, while Maria’s returning to her native Sweden. She thinks she needs more than he can give her, but he’s determined to change her mind, and he’s spent the last six years waiting. Watching. Wanting.

Olivia Dade grew up an undeniable nerd, prone to ignoring the world around her as she read any book she could find. Her favorites, though, were always, always romances. As an adult, she earned an M.A. in American history and worked in a variety of jobs that required the donning of actual pants: Colonial Williamsburg interpreter, high school teacher, academic tutor, and (of course) librarian. Now, however, she has finally achieved her lifelong goal of wearing pajamas all day as a hermit-like writer and enthusiastic hag. She currently lives outside Stockholm with her delightful family and their ever-burgeoning collection of books.

“a smart, stellar contemporary… A banger of a finish, and an absolute joy.”  — New York Times Book Review

While I have loved every book in the Spoiler Alert series, Ship Wrecked's Maria has my whole heart. She knows what she wants and she knows her worth: she's the confident and uncompromising heroine of my dreams. Watching these two grow into each other's perfect match was one of the highlights of my reading year.  — Emma Barry, author of Star Dust

“Deliciously sultry heat, simmering chemistry, and divine characters that you just want to squeeze and then stuff in your pockets…what a joy. Olivia Dade knows how to make this fannish heart squee. I loved every second of Ship Wrecked.” — Charlotte Stein, author of Control

"Dade (All the Feels, 2021) returns with another superbly entertaining, boldly sensual love story that unabashedly champions body positivity and delivers a cast of unforgettable characters, including a heroine who knows her own self-worth and isn’t afraid to fight for what she wants in life. Combine this with wit-infused writing and some love scenes hot enough to keep any Viking couple warm during those cold winter nights, and the result is another impactful romantic triumph from Dade." — Booklist

"An absolutely witty, swoon worthy behind the scenes romp! Delightful from beginning to end!" — Julie Murphy, #1 New York Times bestselling author of Dumplin’ on All the Feels

"[All the Feels] weaves in sharp wit and dry humor even as it tugs at the reader's heartstrings with its exploration of the far-reaching repercussions of trauma...Dade's ironic awareness of popular romance tropes adds another layer of interest and fun. A consistently entertaining and often insightful romance." — Kirkus Reviews (starred review)

“Dade’s charming, sexy contemporary romance will be hard to put down. Alex and Lauren are likable, well-developed characters with emotional depth and relatable backstories that deal with body positivity, mental health, and abuse. While these heavy topics are major plotlines, they enhance rather than overshadow the friends-to-lovers, opposites-attract romance. The writing is excellent, with witty, banter-filled dialogue.” — Library Journal (starred review) on All the Feels

"After wowing readers with Spoiler Alert, Dade returns with another stunning contemporary romance that brilliantly celebrates the redemptive power of love. With a deliciously acerbic sense of humor and endless measures of grace and insight, Dade creatively dramatizes the serious—ADHD and career burnout—as well as the whimsical—an ardor for fan fiction—as she skillfully develops both the sweet emotional connection and the searingly sensual attraction that evolve between Alex and Lauren over the course of this romance between two opposites." — Booklist (starred review) on All the Feels

“Dade delivers and then some. This book frolics through fields of fannish allusion and metatext… It takes a skillful writer to juggle so many elements, yet the emotional through-line shines clear and strong at every point.” — New York Times Book Review on Spoiler Alert

“Joyful, clever, and full of heart, with two irresistible characters whose connection is both gorgeously sweet and wildly hot. Mixing riotous humor and aching tenderness, All the Feels is all the things I love about romance. Olivia Dade has jumped to the top of my auto-buy list!”  — Rachel Lynn Solomon, national bestselling author of The Ex Talk

“Olivia Dade is so gentle with her characters, giving them each the space to become their best selves while also being loved for all their flaws. All the Feels is hilarious and poignant at the same time.” — Cat Sebastian, author of The Queer Principles of Kit Webb

“All the Feels leaves you swooning and eager for more!” — Denise Williams, author of How to Fail at Flirting

“I adore All the Feels. This slow burn romance had me falling in love every step of the way.” — Meryl Wilsner, author of Something to Talk About on All the Feels

“Olivia Dade once again delivers a book as sexy and charming as it is cathartic. Dade's books speak to my soul as she deftly tackles complicated subjects with humor, heart, and infinite kindness. I adored All the Feels and can't wait to see what Dade writes next. Olivia Dade is an auto-buy author!” — Jessie Mihalik, author of Chaos Reigning on All the Feels

“We need more representation like this … Filled with banter and tons of pining, Dade’s Ship Wrecked delivers an intense will-they-won’t-they type of love that is years in the making. Led by two protagonists as stubborn as they are ambitious, this emotional romance will fill readers with hope for their own happily ever after.” — The Nerd Daily