Spring According to Humphrey (Paperback) 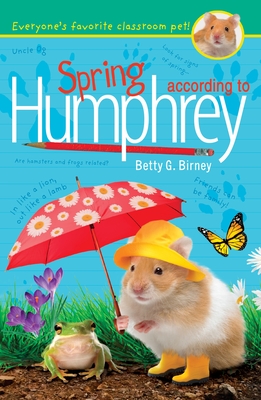 This is book number 12 in the Humphrey series.

The twelfth book in the beloved and award-winning school hamster series!

Spring has sprung and everyone at Longfellow School, including Ms. Brisbane's class, are HAPPY-HAPPY-HAPPY! It also means Family Fun Night is coming up and all the students' families are involved in making amazing circus activities.

Humphrey helps in many ways, but he can't help but wonder about his own family. He doesn't know anything about them. But when he thinks about all of the wonderful friends he has made at school and at his friends' homes, he stops worrying.

Just like spring comes with lots of new things that grow and change, Humphrey's family of classmates and friends will always be growing. And that's just how he likes it.

Betty G. Birney has won many awards for writing for television, including an Emmy, three Humanitas Prizes, and a Writers Guild of America Award. Her first Humphrey book, The World According to Humphrey, was chosen for the One Book One School program. In addition to the Humphrey series, she is the author of The Seven Wonders of Sassafrass Springs and The Princess and the Peabodys. She grew up in St. Louis, Missouri, where her parents grew up as neighbors on Humphrey Street.