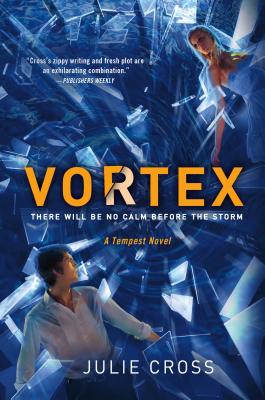 This is book number 2 in the The Tempest Trilogy series.

Julie Cross's Vortex is the thrilling second installment of the Tempest series, in which the world hangs in the balance as a lovelorn Jackson must choose who to save

Jackson Meyer has thrown himself into his role as an agent for Tempest, the shadowy division of the CIA that handles all time-travel-related threats. Despite his heartbreak at losing the love of his life, Jackson has proved himself to be an excellent agent. However, after an accidental run in with Holly—the girl he altered history to save—Jackson is once again reminded of what he's lost. And when Eyewall, an opposing division of the CIA, emerges, Jackson and his fellow agents not only find themselves under attack, but Jackson begins to discover that the world around him has changed and someone knows about his erased relationship with Holly, putting both their lives at risk all over again.

JULIE CROSS lives in central Illinois with her husband and three children. She never wrote fiction before May of 2009, but since then, hasn't gone a day without writing. She is the author of The Tempest Trilogy.

“It will be difficult waiting another year for the next installment of Jackson Meyer and his time travels. But like me, fans will wait anxiously and hope that Cross continues to treat us to the roller coaster ride that is life with the time traveling, teenage CIA agent - Jackson Meyer.” —Examiner.com

“Fans of Cross's debut novel, Tempest, will love returning to the time-jumping adventures of Jackson Meyer. In this trilogy second, the exciting story picks up almost where it left off, so newcomers may be a bit lost at first. Expect a thrill a minute as Jackson discovers he's even more special than he initially thought.” —RT Book Reviews

“Readers will want to time travel to early 2013 to read book No. 2 in this fast-paced and inventive series.” —Los Angeles Times on Tempest

“A surprising emotional punch that leaves you wanting to leap into the future to devour the upcoming sequel.” —Entertainment Weekly on Tempest

“The characters are . . . complex and distinct, they will work their way into readers' hearts and stay with them long after the book is finished.” —Kirkus Reviews (starred) on Tempest

“It's a story packed with moments both tender and electric--Cross's zippy writing and fresh plot are an exhilarating combination.” —Publishers Weekly on Tempest