This Is the Fire: What I Say to My Friends About Racism (Large Print / Hardcover) 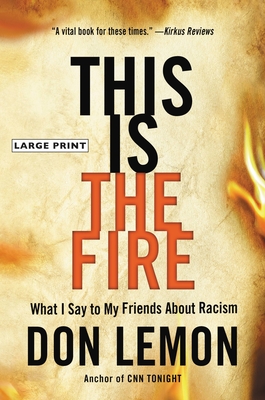 In this "vital book for these times" (Kirkus Reviews), Don Lemon brings his vast audience and experience as a reporter and a Black man to today's most urgent question: How can we end racism in America in our lifetimes?

The host of CNN Tonight with Don Lemon is more popular than ever. As America’s only Black prime-time anchor, Lemon and his daily monologues on racism and antiracism, on the failures of the Trump administration and of so many of our leaders, and on America’s systemic flaws speak for his millions of fans. Now, in an urgent, deeply personal, riveting plea, he shows us all how deep our problems lie, and what we can do to begin to fix them.

Beginning with a letter to one of his Black nephews, he proceeds with reporting and reflections on his slave ancestors, his upbringing in the shadows of segregation, and his adult confrontations with politicians, activists, and scholars. In doing so, Lemon offers a searing and poetic ultimatum to America. He visits the slave port where a direct ancestor was shackled and shipped to America. He recalls a slave uprising in Louisiana, just a few miles from his birthplace. And he takes us to the heart of the 2020 protests in New York City. As he writes to his young nephew: We must resist racism every single day. We must resist it with love.

A news veteran of Chicago, Lemon reported from Chicago in the days leading up to the 2008 presidential election, including an interview with then-Rep. Rahm Emanuel on the day he accepted the position of Chief of Staff for President-elect Barack Obama. He also interviewed Anne Cooper, the 106-year old voter President-elect Obama highlighted in his election night acceptance speech after he had seen Lemon’s interview with Cooper on CNN.

Lemon has reported and anchored on-the-scene for CNN from many breaking news stories, including the shooting of unarmed teenager Michael Brown in Ferguson, MO (2014), the George Zimmerman trial (2013), the Boston marathon bombing (2013), the Philadelphia building collapse (2013), the Sandy Hook Elementary School shooting (2012), the Colorado Theater Shooting (2012), the death of Whitney Houston, the Inaugural of the 44th President in Washington, D.C., the death of Michael Jackson (2009), Hurricane Gustav in Louisiana (2008) and the Minneapolis bridge collapse (2007).

Lemon has also anchored the network's breaking news coverage of the earthquake and tsunami in Japan, the Arab Spring, the death of Osama Bin Laden and Joplin tornado. Lemon reported for CNN’s documentary Race and Rage: The Beating of Rodney King, which aired twenty years to the day of the beating. He is also known for holding politicians and public officials accountable in his "No Talking Points" segment.

In 2009, Ebony named him as one of the Ebony Power 150: the most influential Blacks in America. He has won an Edward R. Murrow award for his coverage of the capture of the Washington, D.C. snipers. He won an Emmy for a special report on real estate in Chicagoland and various other awards for his reporting on the AIDS epidemic in Africa and Hurricane Katrina. In 2006, he won three more local Emmys for his reporting in Africa and a business feature about Craigslist.

Lemon serves as an adjunct professor at Brooklyn College, teaching and participating in curriculum designed around new media. He earned a degree in broadcast journalism from Brooklyn College and also attended Louisiana State University.

"Lemon brings a searing power and persuasiveness to his arguments and views. In his eloquence and candor, Lemon is a lyrical and ardent advocate for what is decent, just, and long overdue. His dismay and anguish are laid bare with a fervor that is authentic and hard-won. Lemon's call-to-action is a soaring examination of the causes of racist violence and injustice past and present, and he expresses his commitment to asking tough questions and seeking demanding answers that he hopes will kindle the fire this time to constructively confront racism in all its forms."—Booklist

"Astutely diagnoses our nation’s greatest malady. . . . Throughout, the author demonstrates an impressive ability to loop it all together and make it stick. He puts 2020 in context and gives it the language to sing a quietly outraged song. Long on context and analysis, this is a vital book for these times."—Kirkus Reviews