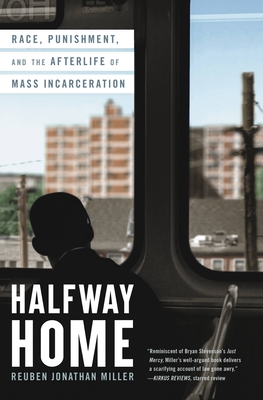 A "persuasive and essential" (Matthew Desmond) work that will forever change how we look at life after prison in America through Miller's "stunning, and deeply painful reckoning with our nation's carceral system" (Heather Ann Thompson).

Each year, more than half a million Americans are released from prison and join a population of twenty million people who live with a felony record.

Reuben Miller, a chaplain at the Cook County Jail in Chicago and now a sociologist studying mass incarceration, spent years alongside prisoners, ex-prisoners, their friends, and their families to understand the lifelong burden that even a single arrest can entail. What his work revealed is a simple, if overlooked truth: life after incarceration is its own form of prison. The idea that one can serve their debt and return to life as a full-fledge member of society is one of America's most nefarious myths. Recently released individuals are faced with jobs that are off-limits, apartments that cannot be occupied and votes that cannot be cast.

As The Color of Law exposed about our understanding of housing segregation, Halfway Home shows that the American justice system was not created to rehabilitate. Parole is structured to keep classes of Americans impoverished, unstable, and disenfranchised long after they've paid their debt to society.

Informed by Miller's experience as the son and brother of incarcerated men, captures the stories of the men, women, and communities fighting against a system that is designed for them to fail. It is a poignant and eye-opening call to arms that reveals how laws, rules, and regulations extract a tangible cost not only from those working to rebuild their lives, but also our democracy. As Miller searchingly explores, America must acknowledge and value the lives of its formerly imprisoned citizens.

Winner of the 2022 PROSE Award for Excellence in Social Sciences

An NPR Selected 2021 Books We Love

As heard on NPR’s Fresh Air

Reuben Jonathan Miller is a sociologist, criminologist and a social worker who teaches at the University of Chicago in the School of Social Service Administration where he studies and writes about race, democracy, and the social life of the city. He has been a member at the Institute for Advanced Study in Princeton New Jersey, a fellow at the New America Foundation and the Rockefeller Foundation, and a visiting scholar at the University of Texas at Austin and Dartmouth College. A native son of Chicago, he lives with his wife and children on the city’s Southside.

Recommended by Jamila Michener on The Ezra Klein Podcast

“The imprint of incarceration on Miller’s life allows him to see and understand things other ethnographers often miss or overlook when they study the caging of citizens. He writes not only as a brilliant scholar, but also as a credible witness.”—Efren Paredes, Jr.

“I have read dozens of books about mass incarceration, but I had never read one quite like Reuben Jonathan Miller’s Halfway Home: Race, Punishment, and the Afterlife of Mass Incarceration. Scholars have long attempted to prove the rigor of their work by demonstrating their “objectivity”— Miller demonstrates that his proximity to the issue of incarceration better equips him to write about it. It’s a simple yet profound insight that gives the book a valuable richness.”  —Clint Smith, The Atlantic

“In Halfway Home, Miller wants us to understand incarceration’s “afterlife”. The book is the culmination of Miller’s research in Chicago and Detroit… it’s also deeply informed by his own personal experiences with the carceral system...Hearts and minds, in this sense, have little to do with people’s feelings. Miller, with this powerful book, implores us to try.”—Jennifer Szalai, New York Times

“Miller writes about criminal justice with the expertise of a legal scholar, but his life experiences and training as a social worker endow his analysis with a vividness and empathy that elude some other critiques of mass incarceration. And he tells stories with a plaintive lyricism that reminded me that Black folks in Chicago were primary creators of the American musical tradition known as the blues.”—Paul Butler, Washington Post

“Impressive…Miller writes in prose that is at once powerful and engaging...This seminal work tracks the path of how we got here.”—NPR.org

“Through vivid stories and evidence of this afterlife…Miller describes “a new kind of prison”…in heartbreaking prose.”—National Book Review

"For incarcerated persons in the United States, release does not equal freedom. Miller’s first book is an important, harrowing ethnographic study that reads like a keenly observed memoir, which, in part, it is. His own father and brothers having been imprisoned, Miller, a chaplain at the Cook County Jail in Chicago, is candidly close to his research on mass incarceration and its after effects. This is essential reading for all who care about justice in contemporary America.”
—Library Journal, starred review

"Striking a unique balance between memoir and sociological treatise, this bracing account makes clear just how high the deck is stacked against the formerly incarcerated."—Publishers Weekly, starred review

“Halfway Home is a vital and compelling account of the entangled legacies of racism, crime, and punishment in America. Miller shows how the nation’s experiment with mass incarceration harms those far removed from the prison's bars. Family members with incarcerated brothers and husbands confront confusing regulations that place restrictions on their loved ones and face impossible choices between caring for family members locked-up or those at home. This persuasive and essential work weaves together moral philosophy, in-depth interviews, legal theory, and personal history, reckoning with the meaning of justice and redemption in an unjust society.” ?—Matthew Desmond, Pulitzer Prize-winning author of Evicted

“As this beautifully written, stunning, and deeply painful reckoning with our nation’s carceral system makes clear, we have not remotely yet grasped what drives it, nor how devastating is its reach. As Miller shows so powerfully, the damage done by this system has been so insidious, and so comprehensive, that certain Americans are always, in effect, doing time and, thus, to undo this crisis, and for most incarcerated Americans to truly ever be able to come “home,” will mean doing a whole lot more work than we have yet done.”—Heather Ann Thompson is the Pulitzer Prize winning author of Blood in the Water: The Attica Prison Uprising of 1971 and its Legacy

“In this subtle mix of memoir, meditation, and sociology, Reuben Miller takes us inside the lives of poor black men and their loved ones whose existences are mangled by the deadly combination of poverty, pain and prison. This vivid portrait of the penal state in action from the viewpoint of its targets will captivate scholars and energize activists for criminal justice reform.”—Loïc Wacquant, author of Punishing the Poor: The Neoliberal Government of Social Insecurity

“Halfway Home  is a stunning book that vividly brings to life statistics on incarceration, recidivism, and life after prison. We see the impact of racism on the lived experience of the people Reuben Miller introduces us to. As in a powerful novel, the characters come alive for the reader. I was deeply moved by their stories, angered by the flagrant injustices of the so-called justice system, furious at the way impersonal bureaucratic regulations made rehabilitation virtually impossible, and awed by the persistence of those who managed—against all odds—to make new lives for themselves. What makes the book even more compelling is Miller’s own story, which is skillfully woven into this richly detailed narrative. Halfway Home comes at a moment of high consciousness about the problem of race in America; its portrayal of the human costs of prisons and post-incarceration will add a critical and clarifying dimension to the conversation.”—Joan W. Scott, Professor Emerita, Institute for Advanced Study

“Reuben Miller’s vivid and beautiful storytelling transports readers into the lives of families caught in the long shadow of mass incarceration. Halfway Home is a must read for anyone seeking to understand this American crisis, which should be all of us.”—H. Luke Shaefer, co-author of $2.00 a Day: Living on Almost Nothing in America

“Miller lifts the veil that keeps most of us, even many criminal justice experts, from knowing the ‘prison beyond the prison’; the ‘supervised society’ to which legions of our fellow citizens are sentenced by birth, by race, and for life. Halfway Home  confronts the reader, whether system reformer or abolitionist, with the enormity of the task ahead if we are to overcome mass incarceration, and the certainty it will haunt any new institutions that arise to take its place.”—Jonathan Simon, author of Mass Incarceration on Trial: A Remarkable Court Decision and the Future of Prison in America

“Reuben Miller’s brilliant new book will make your head spin, your heart bleed and your blood boil. His unique and powerful blend of memoir and ethnography brings the reader uncomfortably close to human stories that expose and excoriate the racialized cruelty of American criminal ‘justice’. He draws deeply on impressive historical and sociological scholarship to make sense of these stories, not just in the search for explanation, but also to find hope of a better way forward. For everyone and anyone who cares about justice, Miller’s book is not just crucial reading, it is a call to join the struggle against 'mass incarceration' and 'mass supervision.’”—Fergus McNeill, Professor of Sociology and Criminology and Social Work at the University of Glasgow, School of Social and Political Sciences

“Much has been written on mass incarceration, but no book gives a better sense than Halfway Home of what it means for the Black men experiencing it, from their plea deals, through their imprisonment, to their impossible reentry. Superbly written with critical acuity and ethical concern, this book is a beautiful ethnography grounded in a personal history and based on fifteen years of research. It is indispensable reading for anyone willing to understand the United States, its unequal society, its racial divide, and its cruel penal system.”—Didier Fassin, Professor at the Institute for Advanced Study and author of Prison Worlds: An Ethnography of the Carceral Condition

“By the time you finish Halfway Home, you will understand the ways in which the American criminal justice system brands transgressors for life. Indeed, you will feel as if some part of you has actually lived it: the endless treadmill of supervision, violation, and incarceration in visible and invisible cages. Reuben Jonathan Miller blends stories and statistics in unflinching and often unsettling ways, and refuses to allow us to look away.”—Anne-Marie Slaughter, CEO of New America

“In Halfway Home, Reuben Jonathan Miller manages to succeed where many deeply informed commentators fall short of the mark: He combines persuasive data with clear prose, close engagement with his interview subjects, and stories from his own personal experience into a compelling blend that will easily keep readers absorbed. His findings are instructive without being pedantic, emotionally resonant without being manipulative. Halfway Home brings a vital new perspective to the role of punishment in our nation’s ongoing denial of equality and justice for all its citizens.” —Jabari Asim, author of We Can't Breathe: On Black Lives, White Lies, and the Art of Survival