The Last Winter: The Scientists, Adventurers, Journeymen, and Mavericks Trying to Save the World (Paperback) 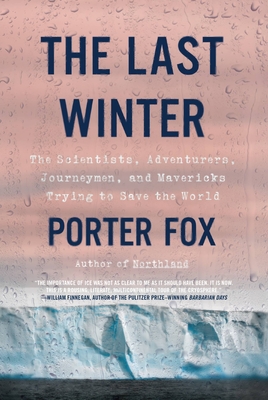 One man’s “curiously thrilling joyride” of travelogue, history, and climatology, across a planet on the brink of cataclysmic transformation (Donovan Hohn).

As the planet warms, winter is shrinking. In the last fifty years, the Northern Hemisphere lost a million square miles of spring snowpack and in the US alone, snow cover has been reduced by 15-30%. On average, winter has shrunk by a month in most northern latitudes.

In this deeply researched, beautifully written, and adventure-filled book, journalist Porter Fox travels along the edge of the Northern Hemisphere's snow line to track the scope of this drastic change, and how it will literally change everything—from rapid sea level rise, to fresh water scarcity for two billion people, to massive greenhouse gas emissions from thawing permafrost, and a half dozen climate tipping points that could very well spell the end of our world.

This original research is animated by four harrowing and illuminating journeys—each grounded by interviews with idiosyncratic, charismatic experts in their respective fields and Fox's own narrative of growing up on a remote island in Northern Maine.

Timely, atmospheric, and expertly investigated, The Last Winter will showcase a shocking and unexpected casualty of climate change—that may well set off its own unstoppable warming cycle.

Porter Fox was born in New York and raised on the coast of Maine. He is the author of Northland: A 4,000-Mile Journey Along America's Forgotten Border and DEEP: The Story of Skiing and the Future of Snow, featured on the cover of The New York Times Sunday Review and in both the U.S. Senate and House of Representatives. He lives, writes and edits the award-winning literary travel writing journal Nowhere in upstate New York.

​His work has been published in The New York Times Magazine, The Believer, Outside, Men's Journal, National Geographic Adventure, Powder, TheNewYorker.com, TheParisReview.com, Salon.com, Narrative, The Literary Review, and has been anthologized in The Best American Travel Writing. He teaches at Columbia University School of the Arts and is a MacDowell Fellow. He won a Western Press Association award in 2014 for a two-part feature about climate change and a Lowell Thomas Award for an excerpt from Northland.


“Before the snowpack vanishes and the glaciers melt away, The Last Winter takes us on a tour of all we are poised to lose—the beauties and elations and wonders, both natural and human, to be found in frigid latitudes and altitudes. Fox is an ideal guide. He writes perceptively and knowledgeably but also lovingly about the places and people he encounters along the way. The result is a curiously thrilling joyride that makes you marvel and grieve.”
—Donovan Hohn, author of MOBY-DUCK and THE INNER COAST

“The importance of ice was not as clear to me as it should have been. It is now. This is a rousing, literate, multi-continental tour of the cryosphere. Check it out: the end of winter, if we fail to prevent it, will be the end of the world as we know it.”—William Finnegan, author of the Pulitzer Prize-winning BARBARIAN DAYS

“From its gripping opening pages to its haunting conclusion, Porter Fox's The Last Winter is poised to become a landmark text in climate change literature. Yet this isn't a dry, doleful book. Instead, it's filled with often gorgeous prose and fascinating, indelible characters who seem to have gone AWOL from a Paul Theroux or Peter Mathiessen novel. Riveting, unforgettable, and important.”—Tom Bissell, author of CHASING THE SEA and APOSTLE

“In the grand tradition of writers like John McPhee, journalist Porter Fox beautifully transforms the language of the natural sciences into captivating and deeply personal narratives. As a new father, Fox revitalizes the terms of the classic Arctic adventure into an emotional allegory of our planet's perilous decline. Absolutely necessary reading, not only as a portrait of our fragile planet, but as a guide for salvation.”
—Jennifer Percy, author of DEMON CAMP

“As winter vanishes, so do the many cultures forged by glacier, ice floe, and permafrost. Porter Fox has written an imaginative and deeply personal travelogue that reveals how climate change is not only a threat to our future, but a threat to our past.”
—Nathaniel Rich, author of LOSING EARTH and SECOND NATURE

"Alarming and adventurous . . . If the book were nothing more than a litany of doomsday data points, it would be important reading, though hard to recommend to any save masochists. But Fox is a seriously terrific writer and an utterly madcap reporter, qualities that allow him to leaven the weighty with the whimsical, the threatening with the thrilling."—Boston Globe

“Ominous though beautifully written. . . It’s the kind of book John McPhee would write if he were abroad in wintry places, and we’re fortunate that Fox has taken his place. An essential addition to the library of climate change and one that ought to spur readers to do something about it.”—Kirkus Reviews, Starred

"What’s lost in those [climate] reports and the doomsaying that often follows is the creative, persistent people behind the study abstracts: those dedicating their lives (and sometimes risking them in the process) to research in some of the world’s most remote and wild places. In The Last Winter, Fox puts names and backstories to much of the data as he travels from Washington State to Alaska to Greenland to Switzerland and beyond, connecting with the scientists who are often painstakingly collecting information that the rest of us rely on to make sense of our changing planet. . . . The book is part adventure travelogue, part profile collection and part essay, as Fox, a lifetime skier, contemplates what the world will be like without snow.”—Scientific American

“Moving travelogue about snowy places and the people who inhabit them . . . A rollicking adventure story. . . . Much to savor in this exciting yet distressing tale.”—Publishers Weekly

"A gripping account of the declining state of the cryosphere . . . Fox has written an important, much-needed book about the climate crisis that injects a personal element into an abstract-seeming problem. This is popular science at its best."—Library Journal, Starred

“As a climate scientist who has studied the north polar region for nearly 40 years, I am all too familiar with what is happening to our planet’s ice, but much of my research has focused on the physics and quantitative observables of climate change. After reading The Last Winter by Porter Fox, I have come to realize that my knowledge of the cryosphere and its importance to our planet, while perhaps deep, has also been rather narrow. . .  .  The Last Winter is a welcome addition to the growing genre of books seeking to link human faces with global climate change. When telling such tales, it can be difficult to find the right balance between science and storytelling. The Last Winter hits the mark.”—Science

“Compelling, thoroughly researched . . . . The Last Winter is a travelogue, climatology brief and warning bell: Fox and his colleagues cannot save the climate by themselves. Fox’s account is an urgent call to savor winter while it still exists--and figure out a way to ensure it doesn't disappear.”—Shelf Awareness

“Deeply researched, beautifully written, and adventure-filled book. . . . Original research is animated by four harrowing and illuminating journeys—each grounded by interviews with idiosyncratic, charismatic experts in their respective fields and Fox’s own narrative of growing up on a remote island in Northern Maine. Timely, atmospheric, and expertly investigated.”—Powder Magazine

"On the corner of Boyd and Fox streets in Portland, a mural depicts a classic winter landscape with the message, in large letters formed by chunks of ice: STAY POSITIVE. It was a useful, if serendipitous, admonition as I came to the end of Porter Fox’s book about climate change, “The Last Winter.” In the face of the terrifying statistics that he cites page after page, positivity, if not optimism, is the only way."—The Portland Press Herald/ Maine Sunday Telegram