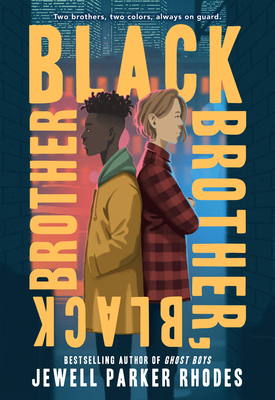 “In Black Brother, Black Brother, Rhodes looks at colorism, prejudice in schooling systems against people of color, and whitewashing in history all in a brilliant sports narrative. After being falsely accused of disrupting class at his private school and then arrested for being angry that no one would listen to him, Donte is encouraged to get back at his bully in their own game: fencing. What follows is a book filled with brilliance, familial love, and friendship. I love this book and look forward to recommending it to everyone!”
— Nathaniel Hattrick, Liberty Bay Books, Poulsbo, WA

From award-winning and bestselling author Jewell Parker Rhodes comes a powerful coming-of-age story about two brothers, one who presents as white, the other as black, and the complex ways in which they are forced to navigate the world, all while training for a fencing competition -- now in paperback!
Framed. Bullied. Disliked. But I know I can still be the best.

Sometimes, 12-year-old Donte wishes he were invisible. As one of the few black boys at Middlefield Prep, most of the students don't look like him. They don't like him either. Dubbing him "Black Brother," Donte's teachers and classmates make it clear they wish he were more like his lighter-skinned brother, Trey.

When he's bullied and framed by the captain of the fencing team, "King" Alan, he's suspended from school and arrested for something he didn't do.

Terrified, searching for a place where he belongs, Donte joins a local youth center and meets former Olympic fencer Arden Jones. With Arden's help, he begins training as a competitive fencer, setting his sights on taking down the fencing team captain, no matter what.

As Donte hones his fencing skills and grows closer to achieving his goal, he learns the fight for justice is far from over. Now Donte must confront his bullies, racism, and the corrupt systems of power that led to his arrest.

Powerful and emotionally gripping, Black Brother, Black Brother is a careful examination of the school-to-prison pipeline and follows one boy's fight against racism and his empowering path to finding his voice.

Jewell Parker Rhodes is the author of Ninth Ward, winner of a Coretta Scott King Honor, Sugar, winner of the Jane Addams Children's Book Award, and the New York Times-bestselling Ghost Boys, and Black Brother, Black Brother. She has also written many award-winning novels for adults. When she's not writing, Jewell visits schools to talk about her books and teaches writing at Arizona State University.

*"A powerful work and must-have for children's collections."—Booklist, starred review

"Placing biracial boyhood and the struggles of colorism at its center, the novel challenges readers to pursue their own self-definition."—Kirkus

*"An excellent selection for both elementary and middle library collections, this is a title that celebrates finding one's place in the world."—School Library Connection, starred review

"Donte's story is a good primer for younger readers on microaggressions."—School Library Journal