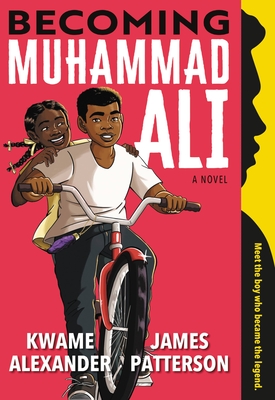 Before he was a household name, Cassius Clay was a kid with struggles like any other. Kwame Alexander and James Patterson join forces to vividly depict his life up to age seventeen in both prose and verse, including his childhood friends, struggles in school, the racism he faced, and his discovery of boxing. Readers will learn about Cassius' family and neighbors in Louisville, Kentucky, and how, after a thief stole his bike, Cassius began training as an amateur boxer at age twelve. Before long, he won his first Golden Gloves bout and began his transformation into the unrivaled Muhammad Ali.

Fully authorized by and written in cooperation with the Muhammad Ali estate, and vividly brought to life by Dawud Anyabwile's dynamic artwork, Becoming Muhammad Ali captures the budding charisma and youthful personality of one of the greatest sports heroes of all time.

Kwame Alexander is the New York Times bestselling author of more than thirty books, including his Newbery Medal-winning novel The Crossover and The Undefeated, winner of the Caldecott Medal and Newbery Honor. He is the founding editor of Versify, which aims to change the world one word at a time.
James Patterson is the world's bestselling author. The creator of Max Einstein and Middle School, he founded JIMMY Patterson to publish books that young readers will love. He lives in Florida with his family.

* "A stellar collaboration that introduces an important and intriguing individual to today's readers."—Kirkus Reviews, starred review

* "The prose and poems reflect Clay's both public bravado and private humbleness as well as his appreciation and respect for family and friends. A knockout!"—Booklist, starred review

* "This utterly delightful story about Ali's childhood is a smash hit. Get this uplifting, informative book onto library shelves and into kids' hands."—School Library Journal, starred review

* "Cassius's narrative illustrates his charisma, drive, and work to know who you are."—Publishers Weekly, starred review

* "Patterson and Alexander, two heavyweights in the world of books, unite to tell the story of how Cassius Clay grew up to be Muhammad Ali, one of the greatest boxers of all time."—The Horn Book, starred review