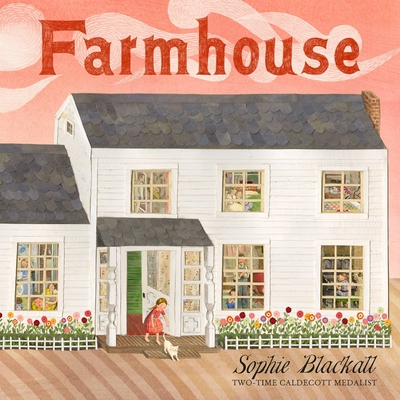 “In this beautiful and heartwarming story, Blackall imagines the life of a family living in a 19th century farmhouse. The gently rhyming prose and nostalgia-laden illustrations make for a delightful read for old and young readers alike.”
— Jen Minor, Flyleaf Books, Chapel Hill, NC

Two-time Caldecott Medalist Sophie Blackall invites readers to peek through windows that shine like real glass on this lavish book’s cover, and explore the dollhouse-like world of a beloved farmhouse where twelve children were born and raised.

Over a hill, at the end of a road, by a glittering stream that twists and turns stands a farmhouse.

Step inside the dollhouse-like interior of Farmhouse and relish in the daily life of the family that lives there, rendered in impeccable, thrilling detail. Based on a real family and an actual farmhouse where Sophie salvaged facts and artifacts for the making of this spectacular work, page after page bursts with luminous detail and joy. Join the award-winning, best-selling Sophie Blackall as she takes readers on an enchanting visit to a farmhouse across time, to a place that echoes with stories.

Sophie Blackall has illustrated dozens of beautiful books including the Caldecott Medal-winning titles Hello Lighthouse and Finding Winnie by Lindsay Mattick. She is also the proprietor of Milkwood, a creative retreat housed in a restored dairy barn, adjacent to a falling-down house upon which this book is based. When not at the farm, she lives with her family in Brooklyn, NY.  She invites you to visit her on Instagram @SophieBlackall.

*"A lovely, tender reimagination of people in a long-past time and place."—Kirkus, starred review

*"A love letter to the joys of country living and family life as well as the importance of treasuring the past and all its stories."—School Library Journal, starred review

*"Blackall’s illustrations are everything here, incorporating wallpaper, fabrics, and other items scavenged from the house melded together with ink, watercolor, gouache, and colored pencil to create vibrantly layered compositions with a tactile quality."—Horn Book, starred review

“a tender, layered masterpiece that itself deserves to be passed along for generations.”—New York Times

*"A sophisticated, openhearted ode to what truly makes a house a home...Vividly realized...."—BookPage, starred review


* "Blackall's charmingly old-fashioned art style is beautifully matched to this nostalgia-rich story, which imbues an antiquated place with warmth and wonder."L—Booklist, starred review

* "A delightful bedtime read perfect for one on one sharing."

* "It's a jewel of a creation and a gift to those who dream of retreat."

"I will be surprised if a more exquisite picture book will be published this year...Children will be fascinated..."

Praise for Finding Winnie:
A #1 New York Times bestseller and Winner of the 2016 Caldecott Medal
A New York Times Notable Children's Book of the Year

*"The sum total is as captivating as it is informative, transforming a personal family story into something universally resonant."—Horn Book (Starred Review)

*"Little ones who love Milne's classic stories will be enchanted by this heartening account of the bear's real-life origins."—Booklist (Starred Review)