Normal Family: On Truth, Love, and How I Met My 35 Siblings (Hardcover) 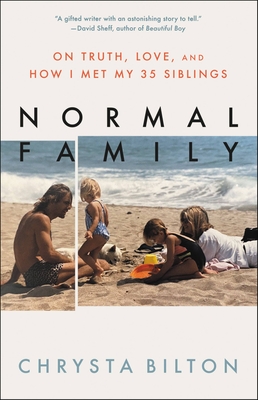 A riveting, nuanced memoir of unforgettable characters thrown together by chance and DNA, this is a story of nature, nurture, and coming to terms with one's true inheritance.

What is a “normal family,” and how do you go about making one? Chrysta Bilton’s magnetic, larger-than-life mother, Debra, yearned to have a child, but as a single gay woman in 1980s California, she had few options. Until one day, while getting her hair done in a Beverly Hills salon, she met a man and instantly knew he was the one she’d been looking for. Beautiful, athletic, artistic, and from a well-to-do family, Jeffrey Harrison appeared to be Debra’s ideal sperm donor.

A verbal agreement, a couple of thousand in cash, and a few squirts of a turkey baster later, and Chrysta was conceived. Over the years, Jeffrey would make regular appearances at the family home, which grew to include Chrysta’s baby sister. But how much did Debra really know about the man she’d chosen to father her daughters? And as a single mother torn between ferocious independence and abject dependence—on other women, alcohol, drugs, and the adrenaline of get-rich-quick schemes—what secrets of her own was she keeping?

It wasn’t until Chrysta was a young adult that she discovered just how much her parents had hidden from their daughters—and each other—including a shocking revelation with far-reaching consequences not only for Debra, Chrysta, and her sister, but for dozens and possibly hundreds of unsuspecting families across the country. After a lifetime of longing for a “normal family,” can Chrysta face the reality of her own, in all its complexity?

Bringing us into the fold of a deeply dysfunctional yet fiercely loving clan that is anything but “normal,” this emotional roller coaster of a memoir will make you cry, laugh, and rethink the meaning of family.

Chrysta Bilton is an American writer who lives in Los Angeles with her husband and two children. Normal Family is her first book.

“I thought my family was complicated until I read Chrysta Bilton’s wonderful memoir about the unique—eccentric, wild, expansive—collection of irresistible characters in her life. Bilton has a big heart, gentle wisdom, keen eye and lovely wit. She’s a gifted writer with an astonishing story to tell.” —David Sheff, author of Beautiful Boy

"By turns hilarious, wrenching, and achingly tender, this is a memoir about family that turns the whole idea of family upside down. Bilton writes beautifully, with sharp insight and a light touch, about her harrowing, astonishing journey into understanding her parents, her (very) extended family, and herself."
—Susan Orlean, author of The Library Book

“Normal Family had me absolutely riveted from beginning to end. Chrysta Bilton has woven an impeccable narrative about the explosion of love, betrayal, and addiction—not to mention the menagerie of animals—that made up her madcap and calamitous childhood. The story is dominated by Bilton’s hedonistic, cult-inclined, womanizing, unstable and uncanny lesbian single mother, who had to make it up as she went along, and is surely one of the most mesmerizing ‘characters’ in recent memoir. Normal Family narrowly escapes being a tragedy, redeemed by Bilton’s compassionate storytelling and unwavering love for her untraditional family.”—Stephanie Danler, bestselling author of Stray and Sweetbitter

“I thought my family was complicated until I read Chrysta Bilton’s wonderful memoir about the unique—eccentric, wild, expansive—collection of irresistible characters in her life. Bilton has a big heart, gentle wisdom, keen eye and lovely wit. She’s a gifted writer with an astonishing story to tell.”—David Sheff, NYT bestselling author of Beautiful Boy

“It’s hard to put into words the many ways this book spoke to me. Normal Family reads like a thriller with its core mystery being the very meaning of life itself: vividly specific but also universal, with family as protagonist and antagonist, but always the hero.”—Ry Russo-Young, filmmaker (Nuclear Family)

"Every family is uniquely dysfunctional in its own way, but Bilton’s might take the cake. In her fascinating memoir, the author writes of her unconventional upbringing and discovering her father had sired dozens of children.”—USA TODAY, Best Books of Summer

“Bilton’s twisty life story is fascinating, and her eye for detail and ability to plumb her painful past for meaning make this a riveting debut.”—People Magazine

“This beautiful, warm, funny book is a testament to human resilience, forgiveness and humour. It is also a love letter to an extraordinary mother.”—Marianne Power, TIMES (UK)