Spies: The Secret Showdown Between America and Russia (Paperback) 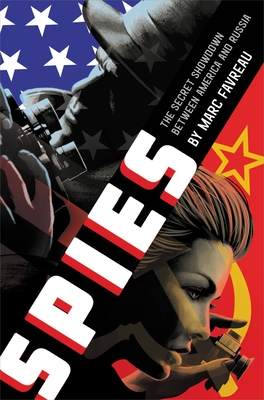 A thrilling, critically-acclaimed account of the Cold War spies and spycraft that changed the course of history, perfect for readers of Bomb and The Boys Who Challenged Hitler. The Cold War spanned five decades as America and the USSR engaged in a battle of ideologies with global ramifications. Over the course of the war, with the threat of mutually assured nuclear destruction looming, billions of dollars and tens of thousands of lives were devoted to the art and practice of spying, ensuring that the world would never be the same. Rife with intrigue and filled with fascinating historical figures whose actions shine light on both the past and present, this timely work of narrative nonfiction explores the turbulence of the Cold War through the lens of the men and women who waged it behind closed doors, and helps explain the role secret and clandestine operations have played in America's history and its national security.

Marc Favreau is an executive editor at The New Press. He is the acclaimed author of Crash: The Great Depression and the Fall and Rise of America and co-editor (with Ira Berlin and Steven F. Miller) of Remembering Slavery: African Americans Talk About Their Personal Experiences of Slavery and Emancipation and the editor of A People's History of World War II: The World's Most Destructive Conflict, as Told by the People Who Lived Through It, both published by The New Press. He lives in New York City and Martha's Vineyard, Massachusetts.

Praise for Spies:A New York Times Best Children's Book of 2019 "Heart-stopping.... At a time when we're entangled in a new escalation of cyber espionage with Russia, Spies provides a concise history of these national antagonisms for young readers, reminding them of the lengths people went to in the past to protect secrets--and to betray them."—New York Times Book Review

* "Skillfully captures the tension of the era."—Booklist, starred review

"This page-turning exposé reads like a briefcase of highly classified files detailing mysterious tip-offs and clandestine meetings, heart-pounding captures and desperate escapes.... Favreau's thrilling approach to covert history will be a welcome classroom supplement for teachers of history, geography, government, and even forensic science."—School Library Connection

"The spies' personal depths of dedication to creating false identities and the stress of shouldering secrets--or selling them--will inspire even reluctant historians to dig deeper and deeper. Ian Fleming couldn't have dreamt up anything better."—Kirkus Reviews

"Favreau takes readers on a deep dive into the Cold War, the politics that drove it, and the stories of the men and women who covertly fought in it...history buffs will be intrigued to see how tenuous the stability of a nation truly is, with its fate often decided by a few intercepted or missed messages....sure to thrill fans of The Americans or James Bond."—BCCB

"An engaging work of narrative nonfiction that young history buffs and future CIA agents are sure to eat up."—SLJ

"Marc Favreau's Spies is narrative nonfiction at its finest: insightful, impeccably researched, and, most of all, impossible to put down."—Deborah Hopkinson, Sibert Honor author of Titanic: Voices from the Disaster

"Marc Favreau's endlessly engaging book brings this dangerous struggle alive and will take his readers on a rollicking ride through the thrills, fears, and cliff-hanger contests of those tumultuous years."—John McLaughlin, former acting director and deputy director of the CIA

"It's hard to think of a book about espionage that is as entertaining, accurate, and accessible as Spies. I've covered the CIA for many years, and found something new in every chapter."—Greg Miller, National Security Correspondent, The Washington Post, winner of the Pulitzer Prize and author of The Apprentice: Trump, Russia, and the Subversion of American Democracy

"Spies is enjoyable, educational and hard to put down. It reads like the best spy fiction but has the benefit of all being true. For someone who lived in the shadows battling the Soviets and Russians, his portrayal captures the reality of that charged and dangerous time."—John Sipher, former head of Russia operations and member of Senior Intelligence Service, CIA

"The secret world of spy vs. spy comes alive in Favreau's thrilling and suspenseful account of the Cold War. It's an amazing story...and it's true!"—Allen Zadoff, award-winning author of the Unknown Assassin series

* "Much like Steve Sheinkin did in Bomb, Favreau writes in a clear and relatable way...this story is far from a slow-moving history book. For readers who think of themselves as history buffs as well as those who just love a thought-provoking story, Crash will deliver on all levels."—VOYA (starred review)

* "An enlightening and very readable book on a complex historical period."—Booklist (starred review)

"Crash is smart, thorough, visually engaging--and incredibly relevant. It may be aimed at ages "10 and up" but I was riveted--I think people of any age who are interested in understanding American history, especially in order to understand where we are today, will be too. It's a clear, concise narrative that makes a complicated history accessible without dumbing down or glossing over the nuances of race, class, and gender."—Kate Schatz, NYT bestselling author of Rad American Women A-Z, Rad Women Worldwide, and Rad Girls Can

"In a forceful, fast-paced, and well-informed narrative, Marc Favreau lets readers experience--no, live!--the worst economic collapse in US history, introducing us to the individuals who suffered through and labored to overcome the financial and social upheaval that was the Great Depression and the remarkable visionaries who rallied a nation against fear, hatred, and divisiveness until a new and stronger America finally emerged. An impressive and important work."
—Jim Murphy, two-time Newbery Honor- and Robert F. Sibert Award-winning author of An American Plague

"A tale of heroes, villains, and redemption, Crash is the story we should all be reading--about a time when Americans were knocked down, dusted themselves off, and rebuilt a world that was safer and more secure."—Michael Eric Dyson, New York Times bestselling author of Tears We Cannot Stop: A Sermon to White America

"Crash is a fantastic resource for young readers to understand the decade that defined America. Through portraits of American resilience--from families in the Dustbowl struggling to survive, to President Roosevelt fighting to restore hope and prosperity to an ailing nation--Marc Favreau tells the story of how our country overcame enormous adversity. This is a compelling portrait of our past that reminds us how we became the nation we are today."—Congresswoman Rosa DeLauro, D-CT Third District and author of The Least Among Us: Waging the Battle for the Vulnerable

"Crash is a terrific book, chock full of personal touches, details, and photographs that bring the people who lived through the Great Depression to life."—George O'Connor, New York Times bestselling author of the Olympians graphic novel series

"Favreau brings an important period of history to life."—Publishers Weekly

"Enhanced by photographs, personal interviews, and primary source documents, the story of one of the most unstable periods in American history conveys the highs and lows of everyday life during those difficult years. The message of the strength and resilience of the American people during this terrible time, and how it helped to shape the country we live in today, is well documented by the author in a reader-friendly style."—School Library Connection

"Favreau [makes] the complex story accessible to middle-school readers...an appealing way to present an introduction to the period."—BCCB