For the Throne (The Wilderwood #2) (Paperback) 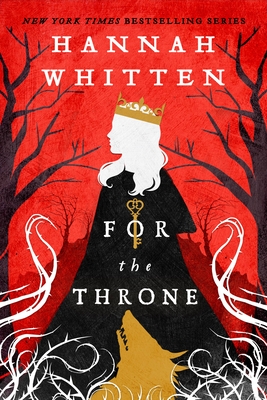 This is book number 2 in the The Wilderwood series.

In this breathtaking sequel to the instant New York Times bestseller For the Wolf, Red's sister Neve struggles to escape a mysterious land of twisted roots, lost gods, and mountains made of bone—and the only clues to her rescue are a magic mirror and a dark prince who wants to bring the whole thing crumbling down.

The First Daughter is for the Throne

The Second Daughter is for the Wolf...

Red and the Wolf have finally contained the threat of the Old Kings but at a steep cost. Red's beloved sister Neve, the First Daughter is lost in the Shadowlands, an inverted kingdom where the vicious gods of legend have been trapped for centuries and the Old Kings have slowly been gaining control. But Neve has an ally, though it's one she'd rather never have to speak to again: the rogue king Solmir.

Solmir wants to bring an end to the Shadowlands and he believes helping Neve may be the key to its destruction. But to do that, they will both have to journey across a dangerous landscape in order to find a mysterious Heart Tree, and finally to claim the gods' dark, twisted powers for themselves.

Hannah Whitten has been writing to amuse herself since she could hold a pen, and sometime in high school, she figured out that what amused her might also amuse others. When she's not writing, she's reading, making music, or attempting to bake. She lives in Tennessee with her husband and children in a house ruled by a temperamental cat.

"Whitten weaves a captivating tale in this debut, in which even secondary characters come to feel like old friends. The novel seamlessly blends "Little Red Riding Hood" and "Beauty and the Beast" into an un-put-down-able fairy tale that traces the boundaries of duty, love, and loss. A masterful debut from a must-read new voice in fantasy."
—Kirkus

"Whitten debuts with a dark, dazzling reimagining of 'Little Red Riding Hood'... Whitten lovingly weaves in elements from other fairy tales, including 'Beauty and the Beast' and 'Snow White,' while crafting a story that is all her own. With clever, immersive prose and a subtle touch of horror, this is sure to enchant."—Publishers Weekly

"Beauty and the Beast is reimagined in this gorgeous and dark matriarchal fantasy... Readers who enjoy Naomi Novik’s fairytale fantasy will love this one as well."—Buzzfeed Books

"Part folklore, part fairytale, and part horror story, Hannah Whitten’s For the Wolf manages to take the familiar – a reimagining of 'Little Red Riding Hood' – and make it feel like something completely new."—Culturess

"Whitten’s masterful reinterpretation of classic fairy tales is delightful, keeping readers on edge throughout the story."—Booklist

"The fairy tale world of Whitten’s Wilderwood duology hangs in the balance in the thrilling sequel to For the Wolf.... Whitten packs this one with action, twists, and betrayals, and weaves in familiar fairy tale imagery with a light, sure hand. This proves a worthy finale."—Publishers Weekly

"Whitten crafts a thrilling finale, with bigger stakes, more sweeping emotions, and more dramatic twists than its predecessor, all ultimately grounded in the complicated, but unshakeable bond between two sisters and the world they may or may not be destined to save ... A beautifully balanced tale of love in many forms, For the Throne is not just a satisfying conclusion to the story that began in For the Wolf, but a bittersweet reminder that in real stories, happily ever after doesn’t exist, and it’s up to us to muddle through the best we can and try to make a future with the people we love."—Paste Magazine

"For the Throne is an action-packed finale to this duology with emotional twists and turns that will leave you breathless."—British Fantasy Society