Rickey: The Life and Legend of an American Original (Hardcover) 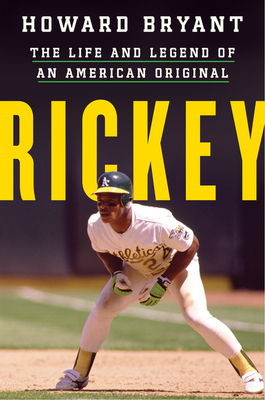 “Seldom does a sports biography—especially a page-turner—so comprehensively explain the forces that made an icon the way they are.” – Sports Illustrated

From the author of The Last Hero: A Life of Henry Aaron comes the definitive biography of Hall of Famer Rickey Henderson, baseball’s epic leadoff hitter and base-stealer who also stole America’s heart over nearly five electric decades in the game.

Few names in the history of baseball evoke the excellence and dynamism that Rickey Henderson’s does. He holds the record for the most stolen bases in a single game, and he’s scored more runs than any player ever. “If you cut Rickey Henderson in half, you’d have two Hall of Famers,” the baseball historian Bill James once said.

But perhaps even more than his prowess on the field, Rickey Henderson’s is a story of Oakland, California, the town that gave rise to so many legendary athletes like him. And it’s a story of a sea change in sports, when athletes gained celebrity status and Black players finally earned equitable salaries. Henderson embraced this shift with his trademark style, playing for nine different teams throughout his decades-long career and sculpting a brash, larger-than-life persona that stole the nation’s heart. Now, in the hands of critically acclaimed sportswriter and culture critic Howard Bryant, one of baseball’s greatest and most original stars finally gets his due.

HOWARD BRYANT is a senior writer for ESPN.com and ESPN The Magazine and appears regularly on ESPN programming, including SportsCenter and Outside the Lines. He has been the sports correspondent for NPR’s Weekend Edition since 2006 and is twice the winner of the Casey Award for the Best Baseball Book of the Year. He is the New York Times best-selling author of The Last Hero, Juicing the Game,Shut Out,The Heritage, and Full Dissidence. He served as guest editor of the 2017 edition of The Best American Sports Writing. His biography of Hank Aaron, The Last Hero, was named by Dwight Garner as “One of the Ten Best Books of the Year” in the New York Times.

"Seldom does a sports biography -- especially a page-turner -- so comprehensively explain the forces that made an icon the way they are." — Sports Illustrated

"I’ve been saying this for years: Rickey wasn’t just great. That doesn’t say enough for me. He’s one of the top 10 to 12 players of all time. That’s how good Rickey was." — Baseball Hall of Famer Reggie Jackson

"Thanks to Howard Bryant’s new biography, we can peel back a few of those inscrutable layers and find the man beneath the swagger…. Bryant does some of his best work along the fault line of race and culture, an area he covers well in most of his writing…. Henderson ultimately had the last laugh: Today he’s seen as an all-time great. Bryant’s book shows how he got there, and the hits he had to take along the way." — San Francisco Chronicle

"[Bryant] lays out the player’s coming-of-age in the cauldron of racism, athletic talent, and Black self-expression that was 1960s Oakland; Henderson’s once-in-a-generation gifts; and his role on the nine teams—notably the Oakland A’s and the New York Yankees—for whom he played over his 25-year career. A worthy addition to the sports collection, like almost any book by this author." — Booklist

“A solid and comprehensive take on the life and career of Rickey Henderson…. The book most succeeds in its rich historical context, underscoring Rickey’s outsize influence in a new vanguard of ‘great Black talents’ that shook up the hallowed white halls of baseball. The result is an indelible account of a one-of-a-kind player and personality.” — Publishers Weekly