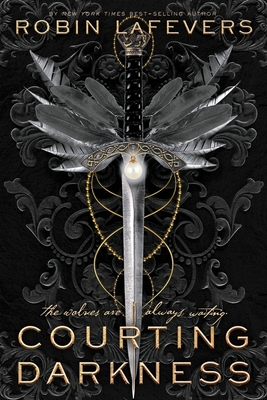 From New York Times best-selling author Robin LaFevers comes Courting Darkness, a “sharp and breathless” (Kirkus Reviews) historical fantasy for fans of Leigh Bardugo and Game of Thrones. Set in the world of the His Fair Assassin series, this first in a new duology now has four starred reviews!

Death was only the beginning.

Sybella has always been the darkest of Death’s daughters, trained at the convent of Saint Mortain to serve as his justice. But in a desperate bid to keep her two youngest sisters from the family that nearly destroyed them all, she agrees to accompany the duchess to France. Surrounded by enemies, their one ray of hope is Sybella’s fellow novitiates, hidden deep in the French court years ago—provided Sybella can find them.

Genevieve has been undercover for so many years, she struggles to remember who she is or what she’s meant to be fighting for. Her only solace is a hidden prisoner who appears all but forgotten by his guards. When tragedy strikes, she takes matters into her own hands, even when it means forsaking the long-awaited orders from the convent.

Followed from alternating perspectives, Sybella’s and Gen’s paths draw ever closer. As their worlds threaten to collide, the fate of everything they hold sacred rests on a knife’s edge.

Robin LaFevers, author of the New York Times best-selling His Fair Assassin books, was raised on fairy tales, Bulfinch’s mythology, and nineteenth-century poetry. It is not surprising that she grew up to be a hopeless romantic. She was lucky enough to find her one true love, and is living happily ever after with him in California. Visit her online at robinlafevers.com and on Twitter @RLLaFevers.

"The many bloody battles, shocking betrayals and steamy kisses offer a satisfying return on investment."—New York Times Book Review  ★ "Sharp and breathless, full of anger and strength. May the sequel hurry."—Kirkus, STARRED review  ★ "A first-purchase gem of historical fantasy for high school and public libraries that will delight fans and engage newcomers."—School Library Journal, STARRED review  ★ "LaFevers' sharply drawn characters, pointed storytelling, and intricate takes on political intrigue will once again have readers turning pages.... [T]here are few writers as fine at their craft as LaFevers."—Booklist, STARRED review  ★ "LaFevers’s blood-soaked, machination-riddled tale captivates as its fierce, passionate, intelligent female characters examine issues of agency and empowerment, freedom, and sisterhood."—Publishers Weekly, STARRED review   "LaFevers yet again skillfully pulls from the history of the 15th century French-Breton War to create a richly developed world of political intrigue, while casting it with deeply relatable and fully fleshed out characters."—The Bulletin of the Center for Children's Books   "Alternating between Sybella’s and Genevieve’s voices, LaFevers maintains an intense pitch of intrigue: murders, assaults, romance, betrayals, and erotic encounters follow one after another with plenty of garrotes, swords, daggers, poisoned sewing needles, and the like."—The Horn Book Magazine —