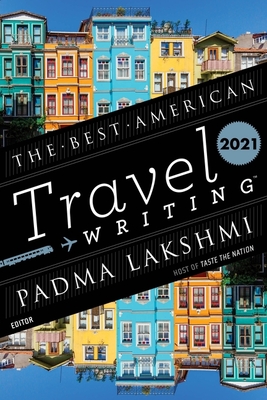 “The beauty of good writing is that it transports the reader inside another person’s experience in some other physical place and culture,” writes Padma Lakshmi in her introduction, “and, at its best, evokes a palpable feeling of being in a specific moment in time and space.” The essays in this year’s Best American Travel Writing are an antidote to the isolation of the year 2020, giving us views into experiences unlike our own and taking us on journeys we could not take ourselves. From the lively music of West Africa, to the rich culinary traditions of Muslims in Northwest China, to the thrill of a hunt in Alaska, this collection is a treasure trove of diverse places and cultures, providing the comfort, excitement, and joy of feeling elsewhere.

Padma Lakshmi is the Emmy-nominated host of the highly rated and critically acclaimed, Emmy-winning Bravo seriesTop Chef, and the author of three cookbooks and food titles: the award-winning Easy Exotic; Tangy, Tart, Hot & Sweet; and the Enclyclopedia of Spices and Herbs. In addition to her culinary achievements, Lakshmi has contributed to such magazines as Vogue, Gourmet, and Harper's Bazaar (UK and US), and penned a syndicated column on fashion and food for the New York Times. Her television-hosting credits include Planet Food and Padma's Passport, as well as other programs in the United States and abroad. A global style icon and the first internationally successful Indian supermodel, Lakshmi also helms companies of her own such as the Padma Collection and Easy Exotic.

Lakshmi is a cofounder of the Endometriosis Foundation of America. Since 2009, the organization has advocated for early diagnosis, promoted research, and raised awareness in the medical community and the greater public about this devastating chronic disease which affects over 190 million women worldwide.

She lives in New York City with her daughter.

JASON WILSON, series editor, is the author of Godforsaken Grapes, Boozehound, and The Cider Revival. He is the creator of the newsletter and podcast Everyday Drinking. Wilson has been the series editor of The Best American Travel Writing since its inception in 2000. His work can be found at jasonwilson.com.