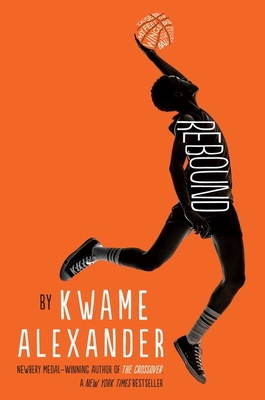 From the New York Times bestselling author Kwame Alexander comes Rebound, the dynamic prequel to his Newbery Award–winning novel in verse, The Crossover.

Before Josh and Jordan Bell were streaking up and down the court, their father was learning his own moves. Chuck Bell takes center stage as readers get a glimpse of his childhood and how he became the jazz music worshiping, basketball star his sons look up to.

A novel in verse with all the impact and rhythm readers have come to expect from Kwame Alexander, Rebound goes back in time to visit the childhood of Chuck "Da Man" Bell during one pivotal summer when young Charlie is sent to stay with his grandparents where he discovers basketball and learns more about his family's past.

This prequel to the Newbery Medal- and Coretta Scott King Award-winning The Crossover scores.

Kwame Alexander is a poet, educator, and the New York Times best-selling author of more than thirty-five books, including Rebound, the follow-up to his Newbery medal–winning middle grade novel, The Crossover. Some of his other works include Booked, which was longlisted for the National Book Award, The Playbook: 52 Rules to Help You Aim, Shoot, and Score in this Game of Life, Swing, and the picture books Out of Wonder and The Undefeated, which was longlisted for the National Book Award and won the Caldecott Medal, a Newbery Honor, and the Coretta Scott King Illustrator Award.

He is a regular contributor to NPR's Morning Edition, currently serving as their poet ambassador.

"An eminently satisfying story of family, recovery, and growing into manhood."—Kirkus, STARRED review   "Librarians who delighted at Crossover’s popularity will be thrilled with this pitch-perfect follow-up...Kwame Alexander is unstoppable."—Booklist, STARRED review   "As in his previous novels in verse, Alexander shows off his expert command of the format, employing staccato breaks with smooth rhymes that mimic the bounce and flow of the sport."—School Library Journal, STARRED review   "A story filled with preteen angst, peer pressure, realistic family dynamics, and first romance is elevated to uncommon heights by a visceral exploration of grief and a search for confidence that pays off in spectacular ways."--Horn Book Magazine, STARRED review   "This book will bounce off of the shelves."—VOYA   "Alexander's non-rhyming poetry has propulsive, hard-hitting rhythm."—Publishers Weekly   "Even without knowledge of the other titles, readers will find this to be a fully realized family drama that stands on its own merit."—Bulletin for the Center of Children's Books   "'Rebound' grapples with grief and loss, but never buckles under the weight of it...Readers familiar with 'The Crossover' will find themselves smiling as details of Charlie’s early life emerge that give us glimpses of the man and father he will later become; those who haven’t read it will find it a strong and satisfying stand-alone book about grief, love and the power of family." —The New York Times    "His books pulse with musicality..." -Tina Jordan, The New York Times     —