Nothing Burns as Bright as You (Hardcover) 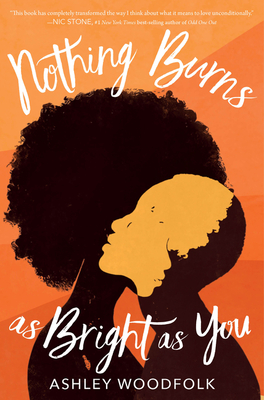 From New York Times bestselling author Ashley Woodfolk, Nothing Burns as Bright as You is an impassioned stand-alone tale of queer love, grief, and the complexity of female friendship.

Two girls. One wild and reckless day. Years of tumultuous history unspooling like a thin, fraying string in the hours after they set a fire.

They were best friends. Until they became more. Their affections grew. Until the blurry lines became dangerous.

Over the course of a single day, the depth of their past, the confusion of their present, and the unpredictability of their future is revealed. And the girls will learn that hearts, like flames, aren’t so easily tamed.

It starts with a fire.

How will it end?

Ashley Woodfolk worked in children’s book publishing before becoming an author full-time. Her novels include the highly acclaimed The Beauty that Remains and When You Were Everything.

“Tight and energetic, effective and deeply affecting… An uncommon exploration of girlhood and its messier relationships.”  — Booklist (starred review)

"The rich language describing the way the two love each other is magnificent... A beautiful, emotionally charged novel." — Kirkus Reviews (starred review)

"All of Woodfolk’s choices—every line break, indentation, and italicization... Even the blank space on the page helps to carry this piece to its full potential as a feverishly gripping, immersive, and emotional ride that will stick with readers for a long time... A masterfully crafted love letter to tumultuous, young, queer love and its lessons." — School Library Journal (starred review)

“Prepare yourself, because this stunning novel is packed with an emotional intensity that's sure to touch your heart.” — Popsugar

"Unapologetically shows the more challenging elements of falling—and staying—in love… This book has completely transformed the way I think about what it means to love unconditionally." — Nic Stone, #1 New York Times best-selling author of Odd One Out

"Nothing Burns as Bright as You is a beautiful exploration of first love with the emotional resonance that only an Ashley Woodfolk novel can bring. Exquisite from beginning to end." — Angie Thomas, #1 New York Times best-selling author of The Hate U Give

"Nothing Burns as Bright as You is utterly captivating, brimming with passion and heartbreak and the beautiful complexity of the human heart." — Nicola Yoon, #1 New York Times best-selling author of The Sun Is Also a Star and Instructions for Dancing

"This highly original story is both heart-wrenching and hopeful. Ashley Woodfolk takes chances with form that make this verse novel captivating. Her skill as a writer has never burned so bright. Pure fire!" — Kwame Alexander, New York Times best-selling author

"There is something sacred in the way Woodfolk bears witness to the scariest, most vulnerable parts of an untamable heart. A fierce, wrenching, deeply honest look at first love—I invite Ashley Woodfolk to break my heart with a book like this anytime." — Leah Johnson, author of the Stonewall Honor book You Should See Me in a Crown

"A loving ode to the queer twin flame relationships of our adolescence that smolder quietly in so many of us. These characters, like Woodfolk’s dazzling and soulful lyrical prose, are both limitless and full of complexity. An exhilarating and quixotic read." — Junauda Petrus, author of the Coretta Scott King Honor book The Stars and the Blackness Between Them

"Nothing Burns as Bright as You consumed me like a flame. The interspersed timelines will keep readers breathless as the love between these girls splatters raw on the page, the poetry absolute perfection. A novel to at once devour and savor." — Kip Wilson, author of White Rose