How Rights Went Wrong: Why Our Obsession with Rights Is Tearing America Apart (Paperback) 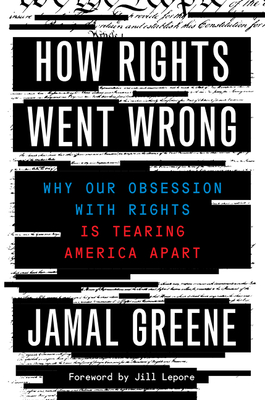 AMERICAN ASSOCIATION OF PUBLISHERS PROSE AWARD FINALIST | “Essential and fresh and vital . . . It is the argument of this important book that until Americans can reimagine rights, there is no path forward, and there is, especially, no way to get race right. No peace, no justice.”—from the foreword by Jill Lepore, New York Times best-selling author of These Truths: A History of the United States

An eminent constitutional scholar reveals how our approach to rights is dividing America, and shows how we can build a better system of justice.

Rights are a sacred part of American identity. Yet they also are the source of some of our greatest divisions. We believe that holding a right means getting a judge to let us do whatever the right protects. And judges, for their part, seem unable to imagine two rights coexisting—reducing the law to winners and losers. The resulting system of legal absolutism distorts our law, debases our politics, and exacerbates our differences rather than helping to bridge them.

As renowned legal scholar Jamal Greene argues, we need a different approach—and in How Rights Went Wrong, he proposes one that the Founders would have approved. They preferred to leave rights to legislatures and juries, not judges, he explains. Only because of the Founders’ original sin of racial discrimination—and subsequent missteps by the Supreme Court—did courts gain such outsized power over Americans’ rights. In this paradigm-shifting account, Greene forces readers to rethink the relationship between constitutional law and political dysfunction and shows how we can recover America’s original vision of rights, while updating them to confront the challenges of the twenty-first century.

JAMAL GREENE is Dwight Professor of Law at Columbia Law School. A graduate of Harvard College and Yale Law School and a former law clerk to Hon. John Paul Stevens, he was a reporter for Sports Illustrated from 1999–2002. He lives in New York City.

“Essential and fresh and vital . . . It is the argument of this important book that until Americans can reimagine rights, there is no path forward, and there is, especially, no way to get race right. No peace, no justice.”—from the foreword by Jill Lepore, New York Times best-selling author of These Truths: A History of the United States     “When Americans talk about rights, we think in absolutist terms: my right prohibits or preempts your action. But as Jamal Greene observes in this deftly argued book, that notion betrays how our rights were originally conceived. Paying special attention to the issues that most vex us, Greene offers an attractive alternative to one of the most troubling aspects of our constitutional jurisprudence.”—Jack Rakove, Pulitzer Prize–winning author of Original Meanings: Politics and Ideas in the Making of the Constitution     “Fastidiously researched and immensely readable, How Rights Went Wrong offers important strategies for advancing human rights in an era when the Supreme Court cannot be counted on to do so. Jamal Greene has written a superb, important book—and a well-timed one, in its plea that we not vest so much power in courts, and that we secure fundamental rights through the political process rather than through constitutional litigation.”—Nadine Strossen, past president, American Civil Liberties Union     “A provocative argument for more humility and listening, and less arrogance and dogmatism. Greene urges that we litigate too much and discuss too little—and that ‘rightsism’ is the problem. Perfectly timed and passionately presented, his argument deserves widespread attention.”—Cass R. Sunstein, author of How Change Happens   “Greene delves deeply into the legal, cultural, and political matters behind rights conflicts, and laces his account with feisty legal opinions and colorful character sketches. This incisive account persuades.”—Publishers Weekly     —